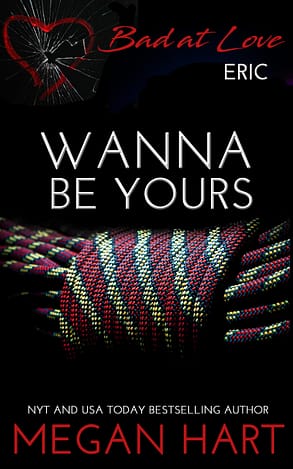 For years, Eric has yearned to belong to the sort of woman who makes it her pleasure to control him. A woman he can worship, adore, cherish, protect. To serve. He’s been in love, sure. Had a Mistress (with a capital M). But never at the same time.

Madeline isn’t sure she believes in love. Lust? Sure. Companionship? Sometimes. But a grand passion, affection, desire and relentless adoration? That’s the stuff of fairy tales, for her.

Madeline hadn’t been expecting Eric’s efforts at wooing her to start so soon, but in the morning she’d woken to find a note scribbled in his scratchy handwriting, asking her to meet him for a date that very night when he was finished with his shift. The cynical part of her assumed much of this was because she had not yet permitted him to come, and a week was, while not an enormous length of time, certainly long enough that he was surely starting to feel restless about it.

Surprisingly, it was Olivia’s friend Sarah who convinced Madeline to make the date. Madeline had bumped into her at a local coffee shop, recognizing the other woman’s distinctive blue hair and ready smile at once. Alex had succeeded in luring Sarah to Dayton, and they both had a laugh about it.

“I needed a change of scenery, and Olivia’s my best friend. If I didn’t pick up and move here, I was going to keep spinning around in circles of my own misery,” Sarah had explained.

“You don’t strike me as the sort to spin in misery of your own making.”

Madeline did not want to be the sort to spin in her own misery, either. She could not keep telling herself she was avoiding the possibility of a lasting relationship because she was pragmatic. She had to admit she was simply…scared.

She had texted Eric to assure him that she would be making their date. He’d taken her to a fancy steakhouse, first making sure she liked steak — a small gesture that nevertheless meant much, since many men simply assumed without confirming her tastes. Now, the server showed them to a table toward the back. Dim lighting. A curved booth.

Eric laughed as they slid into it. “That’s the idea, isn’t it?”

“Wine?” He plucked up the menu and scanned it before offering it to her.

Madeline shook her head. “You choose.”

Eric nodded and looked over the menu again. When the server, a young woman with pale hair tied on top of her head in the shape of a bow, came to ask for their drink order, he chose a Merlot. The bottle.

“Very nice,” she said when the server had gone.

Eric reached across the table to take her hand. He linked their fingers together. “It’s what you like, isn’t it?”

“It is.” In the candlelight, she studied the lines and curves of his face. The shadows. His dark eyes. His white, straight teeth in that broad, easy smile. The thick dark hair, a little too long.

He was so handsome, although perhaps not classically so. Attractive might be a better descriptor, because that encompassed everything about him that appealed to her, and it wasn’t all necessarily related to his physical features. The full package, so to speak.

“What are you thinking?” Eric asked.

His question surprised her. “You.”

“That’s good,” he said. “I want you to be thinking about me. What are you thinking?”

“About how attracted I am to you. How this,” she squeezed his fingers, “is a delight. How much I enjoy being with you, but also how much I enjoy hurting you. Watching your face when you feel that pain.”

Eric hissed out a low sigh. “Thank you.”

“I think I should thank you, Eric. It’s been ages since I had anything like this.”

“You deserve to be taken out. Treated like a queen. I want to give that to you,” Eric said as the server arrived with the wine.

Poured, sniffed, tasted, the dark red liquid gleamed in their glasses as they raised them to clink together. Madeline sipped it. She smiled.

Oh, how she adored the way he looked when she praised him that way. Dark eyes gone darker, sweet, luscious mouth a little lax. A few simple words and his arousal was so clear. He shifted on the chair, and she imagined his cock thickening. The thought of it made Madeline want to squirm a little, herself. She had not lacked orgasms over the past week or so, but she had been denied the pleasure of sharing his.

“Have you had a chance to decide?” The server had reappeared.

“Sorry,” Madeline said smoothly without looking away from Eric. “We’ve been too busy gazing adoringly at each other to even look at the menu.”

The server chuckled. “I’ll give you a few more minutes, then.”

“You decide for us,” Madeline told him when the girl had left them.

His eyebrows rose a little. “Are you sure?”

Other stories featuring these characters