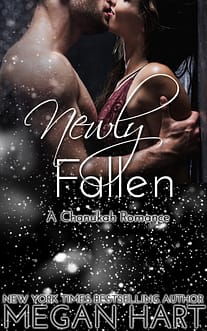 For Lilly Gold, Chanukah is a time to hope for miracles. When the first night of the holiday coincides with a monster of a snowstorm, she expects to be stuck inside for a few days, maybe even the full eight-day holiday. What she does not expect is the sudden appearance of a naked man in her back yard, one who should frighten her but who does not.
Opening her home to Zach soon leads to more, and Lilly finds she’s also opened her heart. But with only eight days for the two of them to share before Zach must leave, can the two of them make the most of their time together? Can Lilly learn the lessons Zach has been sent to teach?

Hugging herself, Lilly stepped back to admire the menorah in the window. She turned out the lights to get the full effect. The candle flames reflected in the kitchen window looked twice as beautiful, casting a warm and cheerful glow around the tiny kitchen. Her appliances weren’t old enough to be retro-chic, they were just old, and the cabinets and linoleum would definitely need to be replaced, but in the menorah’s light, it all looked golden and full of promise, not like a burden.

She wanted to see the menorah from outside. That was the whole point of putting it in the window, to share the light with the world. Grandma had always said it was a mitzvah, a good deed, to share the beauty of Chanukah candles with people outside who might not have menorahs of their own to light. According to Grandma, when the world was new, everything had been light until the vessels of God’s love had been broken, scattering all the sparks across the Earth. Every mitzvah helped gather up a scattered spark and return it. Good deeds were lights in the darkness, each one helping to make the world brighter.

Lilly put her menorah in the window to share her light with the world outside, but she liked to look at it, too. At least half a foot of snow had already fallen and it more was promised, but she wouldn’t let that stop her. Lilly opened the sliding glass door and stepped out onto her tiny deck.

Right into the drift of newly fallen snow and all the way up to her shins. With a yelp, dancing in the snow, Lilly pulled the glass door closed behind her and braced herself against the wind. It nipped and plucked at her shirt sleeves, raised gooseflesh all along her skin. Shoot, she ought to have taken the time to slide into a pair of boots, throw on a sweater, at least. Preparation was never her strong point – impulsiveness was Lilly’s forte.

Danny had hated that about her. Well, screw Danny, Lilly thought, eyes squinted against the snow whipping at her face. She was only going to be out here long enough to look at the menorah, and she’d go right back in. She’d be fine, just fine, the way she was totally fine without him.

She hopped off the deck, meaning to cross the miniscule patch of grass she called a yard to stand in front of the kitchen window. Her ankles were already frozen, her feet numb, so when she suddenly slid she was already bracing herself to end up in a pile of snow.

“Huh?” Lilly looked down at the bare circle of earth into which she’d stepped. The snow had…melted? The earth was squishy under her toes and in the faint light from the neighbor’s yard she could see small wisps of steam rising from the bare earth. Even the grass looked…burned?

“What the –?” Lilly stepped back, heart thudding, eyes blinking.

The circle, if she stood in the center, looked to be as wide as her arms stretched out fingertip to fingertip in all directions. Though the snow was still falling heavily from the sky, it melted as soon as it landed on the ground. But she wasn’t in the center, she was still on the edge, because in the center of the strange circle was a man.