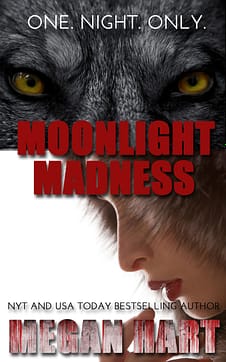 When Rhea is offered the deal of a lifetime on a fur coat guaranteed to change her life, she discovers some bargains aren’t what they appear.

“One night only!” the sign screamed. The letters, so dark a red they looked almost black, glistened in the light of the full moon. “Moonlight Madness! Prices Slashed!”

Rhea paused. The alley was silent, except for the faint sound of water dripping from the fire escape onto cracked and dirty pavement. She’d only meant to duck through here quickly on her way to the nightclub, but the promise of a bargain beckoned her.

She ducked into the shop, pushing back the hood of her faded black raincoat and lifting her hair free of the collar. It was humid inside the small store, and she felt her hair begin to instantly frizz. Great.

An odd smell hung in the air. Somehow familiar, yet she couldn’t quite think of what it was. For some reason it made her think of summers at her grandfather’s Golden Retriever kennel.

“May I help you?” A voice came from the shadows behind the low counter along the shop’s narrow side wall.

Rhea jumped, not really startled and annoyed to find herself acting like she was. “I saw your sign,” she said, rather lamely and instantly embarrassed. Not that I have any reason to be, she told herself sternly. The clerk didn’t know her from a hole in the ground.

Now, for the first time, Rhea looked around the shop’s crowded interior. Clothing racks packed it from end to end, all hung with coats of every kind of fur imaginable. That was the smell, she realized, wrinkling her nose while looking around in utter amazement. Not a bad smell. More like wet dog than anything else.

And no wonder, since it had been raining for nearly a week without pause. Everything had been damp for days, and the humidity was terrible. Other than the smell, the moisture in the air didn’t seem to be affecting the garments in this store. She reached one hand out to stroke the soft fur of the coat nearest her. It looked like mink.

“A lovely choice,” the voice behind the counter said, its owner still in shadow.

“You’re having a sale?” She let the sleek fur drop. Stuff like this you found in Macy’s or Bloomingdale’s, not some dumpy shop in an alley. Well, this wouldn’t be the first time she’d seen things that had “fallen” off the back of a truck. “What’s the occasion?”

“Full moon,” the clerk said. “Have to move out the inventory.”

Rhea strained her eyes to see the owner of the voice, but could only make out the vaguest of forms. “Your sign said prices slashed.”

“Yes,” the clerk replied. “For the right customer.”

“And am I the right customer?” The coquettish tone of her voice irritated her. Where had that come from? Rhea had long ago learned no matter how many times she fluttered her eyelashes or shoved out her chest, she was no bombshell.

A low, dark chuckle that made the fine hairs on the back of her neck stand on end curled out of the dark. “Perhaps. Step into the light.”

She took two steps forward before angrily catching herself. The clerk was still shielded in darkness, but now Rhea stood in what seemed to be a theater-strength spotlight. The brightness made her squint her eyes shut in protest, and made the clerk’s dim form nearly impossible to make out.

“Look, buddy,” Rhea said, perturbed to hear an edge of near-hysteria in her voice. “I don’t know what you think you’re trying to do….”

“Skinny,” the clerk hissed. There came a sharp noise, like long nails tapping speculatively on the counter top. “Frizzy hair. Freckles. Some would call them the Devil’s Spittle. Men don’t flock around you much.”

Rhea flinched, throwing up one hand to cover her eyes against the brightness. She knew she was no beauty queen, but this frank appraisal of her physical appearance was like a slap. Surprisingly and infuriatingly, she felt hot tears spring into her eyes.

“Who…who the hell do you think you are?” she quavered.

“Hell, indeed,” the clerk’s low voice rumbled, and she swore he laughed.

Rhea’d had enough. No fur coat, no matter how luxurious and no matter how cheap, was worth this sort of freak stuff. First the deserted shop, and next the creepy clerk making her feel ugly. She had a nightclub to get to, and even though she knew she would probably spend the night dancing alone, at least it was better than this.

“Wait,” the clerk said, and she saw his dim form move from behind the counter. “I have just the coat for you.”

“I don’t want it,” Rhea retorted, lifting her chin.

He moved out from behind the counter, and despite herself Rhea drew in her breath. He was magnificent, moving with a fluid grace unusual in such a powerfully built man. His dark hair was shoulder-length and shot through with gray. His eyes were a piercing, feral black. And his mouth, she marveled, was a slash of red the color of strawberries. He was the handsomest man she had ever seen, even though his over-thick eyebrows met above the sharpness of his nose, and the shadow on his cheeks was several hours past five o’clock.

He motioned to her with a smile that showed the whiteness of his teeth. “Come. Back here.”

She followed him silently, weaving through the racks of fur that brushed her on every side. As they neared the back of the shop, Rhea cast a nervous glance over one shoulder. The guy, handsome though he might be, was weird. And they were alone. And nobody knew she was here.

“Ah,” the clerk said, stopping finally at the back wall. “Here. Perfect.”

Though the wall had been hung with enough hooks to hang a dozen coats, only one garment adorned the plaster. Rhea took a long, slow breath. She’d never imagined a coat like that.

The coat was fashioned from what appeared to be the entire pelt of the largest wolf she had ever seen. The fur was thick and shaggy, coarse yet with a luxurious sheen that made her want to run her fingers through it. Black, shot through with gray, just like the clerk’s hair. The wolf’s head formed the hood, so when the wearer pulled it up, the jaw would frame her face. Crimson satin lined the inside.

“It’s yours,” the clerk said. Again, he flashed his teeth at her.

She shook her head, pulling away reluctantly. “I couldn’t possibly afford anything like that. It must cost a fortune.”

He named a price that made her laugh out loud.

“You’re joking, right?” she asked bitterly. She knew about jokes, all right. She’d had them played on her many times, mostly by frat boys or businessmen who bet each other on who could find the homeliest girl and trick her into thinking she was something. Oh, yeah, she knew all about jokes.

“I never joke about my coats,” the clerk said. He took the coat down from its hanger and held it out to her. “Try it on.”