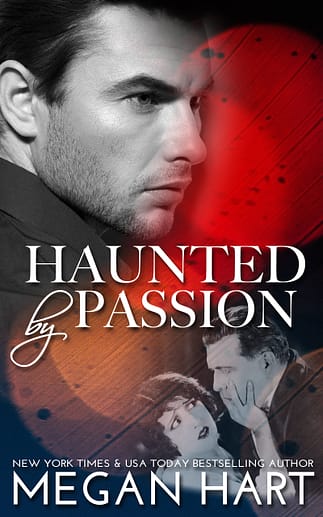 Melissa Benjamin has always loved living in The Valencia. So what if she hears the faint sound of a music box late at night and smells lilac all year round? A little haunting never hurt anyone. Right?

When Jon moves into The Valencia, his presence riles up two spirits bent on lust…and revenge. They’ll do whatever it takes in order to get in death what they missed out on in life, including taking over the growing passion between Mel and Jon.

If Jon can’t prove to Mel that he’s the one who really wants her, he will lose her to a pair of jealous ghosts — One bent on possessing her. The other determined to see Mel dead.

The Kissing & Screaming series features spooky, steamy tales that can be read in any order. For fans of Supernatural, The X-Files, and Buffy the Vampire Slayer.

Melissa Benjamin had grown used to the lingering scent of lilac. The first few months after she’d moved into this apartment, a nice big one on the third floor of The Valencia, she’d driven herself crazy trying to figure out where the smell was coming from. No lilac bushes planted outside. No spilled bottles of perfume or fabric softener, no forgotten melted candles tucked away in any of the closets or cupboards. Just the pervasive and intermittently lingering scent of those purple flowers. It reminded Mel of her grandmother, a sort of powdery, old-lady scent, and that was nice. Much better than her last apartment, anyway, which had often reeked of the neighbor’s greasy cooking and weed habit. She’d given up trying to figure out where the smell came from, or what triggered it. In fact, most of the time, she barely noticed it.

The music was a little harder to ignore.

It had woken her just now, the soft, tinkling sounds that reminded her of a music box. The kind you wound with a small key. A jewelry box with a ballerina inside that who spun on one toe when you opened the lid.

Mel opened her eyes into the dark, her blankets a warm comfort against the chill of an early spring night. She’d snuggled down deep, one ear pressed firmly into the softness of her pillow, the other covered by the comforter pulled up over her eyes. Both the pillow and the comforter blocked a lot of errant noise, which made the slowing, fading music- box tune harder to hear, and because she’d grown as used to it as she had the smell of lilac, at first she didn’t do anything but close her eyes again and wish for sleep. After a few seconds though, when the music didn’t stop, she shifted the comforter from off her face and turned onto her back.

It The music was never loud or raucous, that music. It was aAlways the same tune. “Au Claire de la Lune,” she thought it was, though sometimes it stopped after so few notes she couldn’t be sure. It always sounded sort of faint and far away, yet every time, it managed to wake her up as quickly as if someone had whispered her name directly into her ear. Mel listened now, waiting for the song to die away into the darkness and let her get back to sleep.

This time, it didn’t. The song started up again, slightly louder. A little faster. Almost like as if someone had re-wound the music box.

She knew it was silly to call out into the dark that way. If it were a burglar messing around in her living room with some random music box that didn’t exist in her living room, he’d hardly be likely to answer her. And if it wasn’t something human, if it really was indeed the ghost she’d joked about since moving in, well…did she really want to hear a reply?