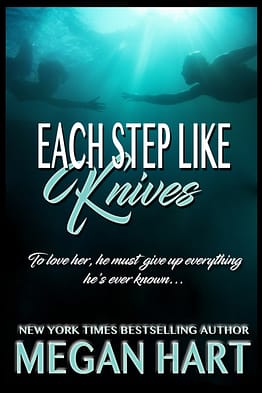 Jeenai has left his home in the ocean to find the woman he loves.Together, can they make a new life together? Or is the pain of leaving what they loved behind too much for them both?

“Where’ve you been?” Krall’s hands moved in speech as he swam into the arched doorway to block Jeenai’s passage.

Jeenai patiently waited until his older brother moved aside, then swam through to the chamber beyond. “None of your business.”

“You’ve been to the surface again.” Krall gestured triumphantly. He swam after Jeenai and caught him by the arm, a grasp Jeenai could have easily thrown off but suffered because his brother ranked higher than he did.

“It’s not your business, Krall.”

Krall dropped his hand. “What were you doing there? Watching for your split-tail again? When are you going to stop wasting your time?”

Jeenai knew his fascination with the human’s world was considered poor taste by many, and outright perversion by others. He did not lose his temper. Krall was obviously itching for a fight Jeenai didn’t want to give.

“I’m not accountable to you,” he replied evenly. He added the sweeping motion that indicated respect to placate his brother. “Now, I’m hungry and weary. I’m going to eat and refresh myself.”

Krall slid backward through the water with a push of his muscular tail. He fixed Jeenai with a fierce glare.

“We’re just concerned about you, that’s all.” Krall’s normally boisterous gestures were smoother. “You don’t join in the revels any longer. We never see you laugh. You don’t even show an interest in the competitions any longer.”

Jeenai thought of the human woman. Krall was right. Jeenai didn’t take part in the nightly revels or competitions any more. They held no appeal for him. Still, the concern in his brother’s face made him pause.

Krall grinned and churned the water with his tail. “What are you waiting for? The fems await, oh, my brother!”

“At the revel, you’ll fill every appetite.”

Jeenai shook his head, but followed his brother back through the arched doorway and into a courtyard. The palace walls rose above them, almost higher than he could see. The shadow of a whale or some other large beast passed overhead, darkening the sand for a moment as the brothers swam toward the courtyard’s other side.

Already, Jeenai could sense the commotion and noise of the revel. They swam through another arched doorway into a larger room. The floor of this room was fine, soft sand. The walls, as with most of the rest of the city, had been carved from coral and stone. Along the far wall, a cage teemed with what the hunters had brought in that day, while a low bench held carved shell bowls of seaweed and other delicacies. Again, Jeenai’s stomach grumbled and he headed for the feast.

“Fill your belly later!” Krall said, but Jeenai ignored him.

Jeenai saw a young fem wrap her arms around Krall’s waist and distract him with her kisses. Shaking his head, Jeenai continued toward the food. Swimming to the surface and back had made him hungry.

The fem hovering close to the goblets of fresh squid ink gave him a smile that clearly showed every one of her pointed teeth. She was a blue, and Jeenai admired the shimmering colors of her skin as he approached. Her sleek, triangular fin was nearly pure white at the tip, with bands of color growing progressively darker as they traveled toward her torso, until they reached a line of pure indigo at her waist. She had attractive markings, and she knew it.

Without speaking, she handed him one of the goblets, which Jeenai quaffed immediately. She scooped a handful of soft seaweed into her palm and offered that to him next.

He reached for it, but she pulled it back coyly. She lifted the trailing vegetation toward her full breasts. Her nipples were tight and red with arousal.

Jeenai turned toward the table and chose another bowl from which to eat. “Find another lover. I’m hungry.”

The fem pouted and tossed down the seaweed, but she didn’t give up. She swam up behind him and put her hands on his waist. Jeenai could feel the pebbly points of her nipples against his back.

His cock rose despite himself and the fem slid her hand around to caress it. She grasped it firmly and stroked downward, all the way to the base of Jeenai’s ventral slit, and then she slid her fingers inside to stroke the round stones of his testicles within. They pulsed in her hand, and Jeenai let the bowl drop.

He twisted in the water and gathered her into his arms. The human woman’s face filled his mind as he pushed the fem toward one of the private niches set into the walls. The human woman had firm, full breasts, too, just like these.

Food forgotten in the lust of mating, Jeenai pulled one of the fem’s nipples into his mouth and suckled. She thrashed beneath him, back arched upward to press herself harder against him.

She was already fully aroused. Her slit opened to reveal the perfect opening and small, hooded pearl just above. She touched herself there and made her fingers dance on the pleasure spot. The water was already full of the odors of many fems and mals engaged in mating, but now Jeenai could smell this one. Her pheromones filled his nostrils and sent another bolt of pure lust through his body.

Her body spasmed in its first climax as she pleasured herself. Her nipples released a succulent nectar with each twitch of her body. Jeenai drank it and felt his cock swell even harder from his body. She stroked him again then brought him to her slit. He slid inside her all the way.

The blue put her arms around him and held him tight while his penis thrust in and out. Her mouth came down on his shoulder and left a perfect half-circle of marks from her teeth. Swept up in the frenzy of the fuck, Jeenai barely noticed.

She shuddered again. Her conch clamped down around him and rippled along his cock. The pressure in his balls built, up and up, not allowing conscious thought, only action. Jeenai humped against the fem harder. They turned over and over in the water. He closed his eyes against the blur as they moved faster.

She pumped him. Her inner muscles moved along his cock as firmly and easily as her fingers had, and he approached his own first climax in moments. It tore out of him. His entire body suffused with pleasure.

The fem loosened her grip a little before she bore down on him again. In another moment, he was on the edge of his second orgasm. Though smaller than the first, it was no less pleasurable.

Their third climax came at the same time. The fem thrashed and jerked in Jeenai’s embrace before quieting. Her gill slits fluttered from her exertion.

She pulled away from him, her nipples already returning to their non-aroused color of dusky beige. She smiled. “You are accomplished in the fuck.”

She looked back at the table of food, now mostly empty after the revelers had feasted while Jeenai mated with the blue. “You’d better hurry before it’s all gone.”

Then with a flip of her tail, she pushed off into the crowd. Jeenai stared after her. His cock shrank back into his body and the opening at the front of his tail closed to conceal it. He couldn’t deny the pleasure he’d just taken with that fem–a stranger to him–but though his body had been satisfied, his mind had not. Something was missing from that joining, and it had nothing to do with sexual completion.

He went to the cage and reached for one of the fish inside. It swam frantically away from him, but he caught it easily and tore into its flesh. The blood slid down his throat, assuaging his hunger. He spat the bones aside, where they’d be eaten or gathered up by the crabs and bottom-feeders. He took another, and another, before his stomach stopped its muttering. Then he drank another goblet of ink and turned to face the room again.

The revel hadn’t ended, and probably wouldn’t until the next change of the tide. Those who tired of it would leave for rest and food, only to return for more sex play. Partners joined and shared their climaxes, then parted to experience the next with a different partner. The water became cloudy with churned up sand and air bubbles from the thrashing.

All at once, the sight and smells made Jeenai’s gorge rise. This was not what he wanted. He’d been tempted into it by his desire to placate his brother and the undeniable attraction of the blue, but now, even though his cock twitched and began to rise from his ventral slit again, Jeenai left the hall and sought the peace of the garden.

There he floated on his back and stared up through the darkness, imagining the surface and the lights they called stars.