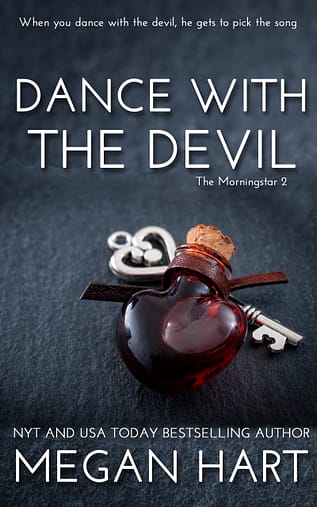 When the devil starts the music, you’d better get ready to dance.

Kathleen Murphy has sold her soul to the devil. Fame, fortune, success…everything she’s ever dreamed of is hers, and all she has to do is the devil’s bidding. When love comes knocking, the last thing in the world she wants to do is involve Jake in her twisted world, but the devil’s started up the jukebox and Kathleen has no choice but to learn the steps.

Kathleen Murphy had blood on her hands.

Not much; a drop or two had grimed into her knuckles. A sliver of crimson had gone to brown beneath her fingernails. In the hollow of her wrist, between the tendons and hidden by the tattoo, was a smear of red that blended so neatly with the inked artwork that the only way to see it was to know it was there.

She knew it was there.

She would always know it, no matter how many times she scrubbed and scrubbed. She could wash her hands and did, dozens of times a day, sometimes until they became chapped and raw. Sore. And yet she woke every morning with her skin as fresh and unblemished as though she’d come straight from the womb. Every day a rebirth.

That’s what the devil did for her. Among other things — the wealth, the fame, the success, the adoration. The devil gave her beauty, too. Nary a pimple dared mar her. The fever blisters that had plagued her since childhood? Gone. The lines at the corners of her eyes? Smoothed. That crooked front tooth that had made her smile uniquely her own? Not straight, but no longer quite as jutting and obvious.

“Beauty,” the devil had told her while she looked at herself naked in the full-length mirror and marveled at how her body had changed, “is not perfection. People think it is. Symmetry is pretty, sure. But real beauty, real true beauty, comes from flaws.”

She still had plenty of those. The devil had whittled away the extra jiggle in her thighs and belly but left behind the marks of childbirth. He’d given her higher tits, but not bigger. As with her smile, the difference was so subtle nobody would notice any difference. He’d made her beautiful, but he’d left her far from perfect.

Now, with the water running hot enough to scald her, Kathleen rinsed and washed and scrubbed her hands free of the blood. She did it matter-of-factly. Without expression. If truth be told — and wasn’t the truth always told eventually, whether you wanted it to remain a secret or not? If truth be told, she was not only without expression, but she’d managed to fold away all residual semblance of emotion.

She’d long ago learned there was no profit in remorse.

Her hands clean, at least to anyone who’d ever look, she smoothed her hair. Touched up her lipstick, blowing kisses to her reflection. Powdered her nose. She turned her face from side to side, making sure there was nothing to suggest she’d been sick enough to vomit only a few minutes before. Thinking of that, she pulled a small bottle of mouthwash from her purse and rinsed her mouth, spitting again and again and washing down the foam with water from the faucet. She finished just as the handle to the restroom door jiggled.

“Just a minute.” There. Her voice, steady and calm and reasonable and quiet and firm and soothing.

Nothing to see here. Nothing wrong. All was well and would always be well, she thought.

She opened the door to face a bored girl texting on a smartphone who barely looked up at her. The bathroom opened into a narrow, chilly hallway with the door to the back alley on the far end, the entrance to the kitchen behind a Japanese rice paper screen across from it. As the girl pushed past her without a word, Kathleen considered heading out that back door to make her escape, but that would only end up delaying the inevitable. Besides, it would be rude.

Her sins were many, but deliberately inconsiderate was one thing Kathleen was not.

“So sorry,” she said as she slid back into her seat across from the very nice, very bland, very boring man who’d been waiting so patiently for her. “I got a call from my agent while I was in the restroom. I had to take it.”

“I thought maybe you’d run out the back.” He laughed at his own joke. He had a nice laugh. Soft, unassuming. Like the rest of him.

Oh, how she wanted to like it. And him. But instead, she managed a half smile and thought ahead to the end of the night when she would crush his self-esteem with a few choice words. Her words. She could blame the devil for the saying of them, but not the words themselves. Those she would have to think up on her own.

Why the Morningstar wanted her to break this man’s confidence, Kathleen did not know. She hadn’t asked. In the end, it didn’t even matter. The devil asked. She did. It was the bargain they’d struck, and one she aimed to keep for as long as she could.

It was an interminable dinner, during which she ordered the most expensive items on the menu and did no more than take a bite or two of each. And after, her date led her to her car, and they began the awkward dance of would he kiss her there? Would he ask her to continue the date with coffee, a movie, bowling, a quick romp back at his place? He tried for the kiss, as it turned out, which made it all the easier for her to turn her face at the last moment with a grimace of barely veiled distaste.

That was all it took. Poor Jim, whose breath wasn’t minty fresh but certainly ranked higher than the stench of the dead rats that earlier in the evening Kathleen had pulled from the traps in the restaurant’s storage room and dumped into the meat grinder while the sous chef in charge of making the gourmet burgers had been mysteriously distracted. Kissing Jim wouldn’t have been a hardship. She’d had worse things in her mouth, after all.

But her words. They were sharp enough to slice. And Jim turned out to be the sort of man who took them to heart. She saw it in the way the light that had been in his eyes all night went out, like a candle extinguished.

“I’ll call you,” he said, stepping back from her. No kiss.

They both knew he wouldn’t, but she smiled and nodded. “Great. Thanks for dinner.”

She let her gaze linger on his just long enough to really make him remember her, as if he could ever forget. Then with a small half-wave, Kathleen got into her car, a smoke gray Lexus sedan that she hated but drove anyway because every time she got behind the wheel she could punish herself, just a little bit. She looked in the rear view mirror as she pulled away, but Jim was still standing next to his car when she left the parking lot.

Don’t miss the other Morningstar stories…