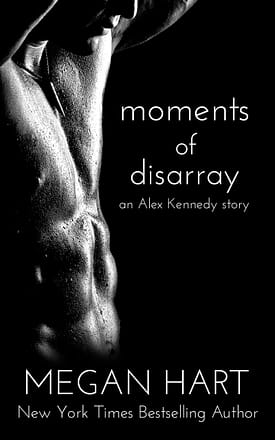 Alex Kennedy knows he’s a rascal. A rogue. An arrogant bastard. He wreaked havoc on his best friend’s marriage by falling in love with his best friend’s wife, and now he’s trying to move on. Sex, drugs, booze, boys, girls and toys. He’s hell-bent on forgetting the past and running toward a future he doesn’t believe he deserves, only to discover the truth in moments of disarray.

This novella takes place after the events in Tempted, Everything Changes and Vanilla, but before what happens in Naked.

“So…that’s the Liberty Bell.” Alex chuckled with a shake of his head. They’d waited in line for half an hour to see it, looked at it for two minutes, then moved on.

“Thanks for taking me to see it, I guess.” Alex shoved a hand in his jeans pocket as they left the building in which the bell was housed. “I was expecting something a little more impressive, not going to lie.”

“Ain’t that the way, though? Everything you wait so long for ends up being kind of underwhelming. Kind of like cheesesteaks.”

Luke laughed after a startled look, probably at Alex’s choice of admonition. “Oh, yeah, but around here, people act like Geno’s and Pat’s are the only place to get one. Truth is, I can take you to a place with a cheesesteak so good it will practically make you…”

Luke laughed again, this time uncomfortably. “Something like that.”

“Not a fan of coming in my pants, to be honest. Kind of messy.” Alex turned around to walk a few steps backward while watching Luke’s face carefully for a reaction.

They’d spent the afternoon sightseeing, and Luke had never once so much as made the effort to flirt. Didn’t try to take Alex’s hand, not that he was much for hand holding. No innuendos. His last comment had sounded offhanded, not something meant to get a rise out of Alex. It was curiouser and curiouser, as that little freak Alice was fond of saying.

The male voice from behind them turned Alex in that direction. Luke turned too, his shoulders going stiff and straight. His jaw set.

“Hey, buddy.” The man jogging up to them was a real bro. Long basketball shorts, a sleeveless tank, backwards baseball cap. He clapped Luke on the shoulder and rounded on Alex with a hand out. “Hey. Brent. I’m Luke’s brother.”

“Fraternity, not sibling,” Luke said. “This is Alex.”

He shifted from foot to foot in the way runners did at stop lights, so they didn’t lose their momentum or whatever the fuck. Alex never ran, so he had no idea why they did that. Alex took a step back.

“What are you up to, man?” Brent asked Luke.

Brent grinned, still jogging in place. “You from out of town, huh?”

“Cool, cool. Hey, get him to take you to Pat’s, King of Steaks, man. Don’t let him try to take you to Geno’s! Luke, see you later.” Brent shook Alex’s hand again, slapped Luke on the back hard enough to stagger him forward a step, then ran off.

Alex said nothing for a moment, but when he looked at Luke, he couldn’t hold back the laughter. “Whoa.”

“He’s a good guy.” Luke sounded a little defensive, but then he laughed, too.

“I’ll tell you what, though, I could eat the fuck out of a cheesesteak.”

Luke grinned. “Okay, but I told you, I’m not taking you to either one of those places. I’ve got a little dive bar favorite. I’ll take you there. And…hey, thanks for not. You know.”

“Dropping to my knees and blowing you right here in the middle of the street in front of your frat brother? No problem.” Alex kept his tone neutral, an eye on Luke’s expression.

The other guy had the good grace to look a little ashamed, but he gave an honest answer. “Yeah. That.”

Luke shook his head. “It’s not fine. It’s a douche move on my part, to act like you’re just some friend or something. Instead of, well…shit.”

They were blocking the traffic on the sidewalk, and Luke’s voice had risen enough to attract attention. Alex didn’t care much if the entire city of Philadelphia knew that he liked to get his dick sucked by other dudes, but somehow he didn’t think Luke felt the same way. He gestured.

“Why don’t you take me to this dive bar,” he suggested.