Jack and Josie have a game. 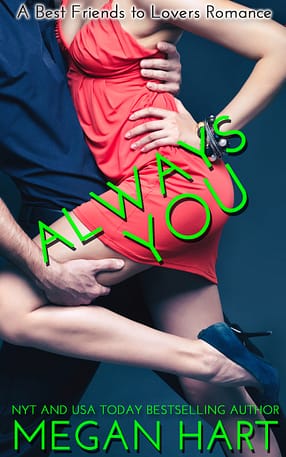 Ten points for correctly predicting which lame come-on the next person will use to hit on you. Fifteen points for getting asked for your phone number. Twenty for being bought a drink.

Get someone to ask you to go home with them, and you’ve won The Game.

Now Josie’s tired of watching beautiful women throw themselves at the one man who’s always been there for her, and even winning has become losing if it means the man who takes her home from the bar isn’t Jack. She knows how to get other men to fall at her feet, but will the same moves work on her best friend? In love and lust, it’s all about Playing The Game…

Jack and Josie have been friends for years, but what will it take to convince them it’s time to become more?

Always You includes Playing the Game, Opening the Door and White Wedding, three novellas from the author of best-selling novels Dirty, Broken, Tempted and more.

The phone had been ringing off the hook all morning. Josie would have let voicemail take care of it, but that would only mean she’d need to return all the calls later, and later she wouldn’t have time. She’d have to take a half day to get down to her parents’ house before the holiday started, and she had tons of work to get done before then. “Good morning. This is Josephine Levine.”

She expected one of her clients. Instead, her mother’s exasperated voice greeted her. “Josie! Thank goodness. I’m glad I caught you. I’ve been trying to reach you at the apartment for days!”

Guilt picked at Josie. Jack had kicked the phone off the hook while they’d been making love, and it had been two days before either of them realized nobody could get through. “You should’ve called my cell. We never answer the landline.”

Josie laughed. “I don’t know, good point. You have my cell number, don’t you?”

“Yes, I have it,” her mother said. “I just didn’t realize you wouldn’t answer your other phone. Listen, Jojo, I’m going crazy here. Aunt Flo has nowhere to go for Passover this year, and Dad said she could come here. Of course, I don’t mind. I love your Aunt Flo, but you know she won’t come without Pansy and Apricot.”

Josie winced at her mother’s childhood nickname for her. “Mom. Breathe.”

Ava sighed. “Those dogs are like Flo’s children. I can’t ask her to leave them home. But you know Bernie and his allergies, and Bea with her bad back. And with all the kids, where am I going to put them all?”

Josie smiled. Her mother didn’t need her help. Her mother could have organized Attila the Hun’s elephant-mounted hordes without batting an eyelash or breaking a nail. Josie tapped her pencil on the list of things she still needed to do before leaving work tomorrow. “Mom, I’ve got to go.”

“But what about you? And Jack, too? We’re going to be packed to the brim this holiday. Not that I mind, of course. You know I love a house full of people more than anything. But it’s a lot of work, I don’t mind telling you.”

“Our family is growing and growing.” Ava paused significantly. “Your brother and sister are married, and now they have the kids—”

“Mom, enough.” Josie took a deep breath. “There’s something I have to tell you.”

“Jack and I…” Josie paused. “Jack and I will be sleeping together.”

“Josephine, you’re a treasure. That’ll solve all my problems. I’ll put Aunt Flo in the back downstairs bedroom with the dogs. Bernie can go on the third floor and the kids in the playroom. Marty and Bea can take your old room, Seth and Rachael and the baby can stay in Seth’s old room, and Miriam and Brice can stay in her old room. The Golds will go in the guest room. You and Jack will sleep in the basement. It’s perfect!”

“Later, doll. I have to run to the supermarket! I want to get some of that chopped liver your brother likes so much. See you tomorrow. You’ll be here before dinner, right?”

“Right.” Josie sighed and listened to the dial tone for a moment before putting the phone back in its cradle. Then she laughed. Most young women would have sent their parents into a tizzy by suggesting she’d sleep with a man she was bringing home. Her mother, on the other hand, was thanking her. Of course, if it had been any man other than Jack, her mother would have swooned. But it was Jack. Josie tilted back in her desk chair, her eyes half-closed. She was in love with her best friend, and it was better than anything she’d ever dreamed of. As children, they’d played tag and hide-and-seek. In high school, he’d been her date when soccer stud Kent Dillon dumped her the afternoon before the junior prom. She’d cried on his shoulder and he’d offered to beat up the guy who’d hurt her so badly. In college, he’d visited for weekends and sent her dorm-mates into a flirting frenzy. After that, they’d kept in touch regularly, never going more than a week or two without calling, and when he’d finally moved to Harrisburg to follow a job, they hadn’t been apart for more than a few days at a time. She’d spent more time with Jack than she ever had with any boyfriend.

She’d shared more with him. Given more of herself to him. Despite all that, becoming lovers had opened a side of him she’d never seen. This morning she’d wakened to find a lacy black garter belt, crotchless panties and matching bra laid out on the bed beside her. Sexy, seamed stockings completed the ensemble, which had come with a note. Wear me. Josie liked nice underwear, but comfort usually came before fashion. She’d worn the lingerie anyway. Now she shifted her thighs against one another and shivered at the sensation of her flesh so bare beneath her skirt. The garter belt was surprisingly comfortable, stretchy and soft instead of scratchy like she’d expected. The stockings were whisper-thin, and when she slid her legs together it felt like she was rubbing herself with silk.

Her phone rang. Startled, she thumped her chair back down solidly on the floor and picked it up.

“Are you wearing them?”

Josie turned in her chair and locked her office door. “Yes.”

Jack’s deep rumble stroked her ear through the phone. “How do they feel?”