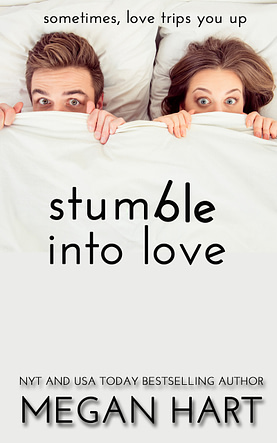 When Laila Alster hires klutzy LoveMatch escort Hal Kessler to pose as her fiance, it’s not to impress her family.She plans an explosive breakup to convince them she’s better off single. Hal enthusiastically tries to to act like the utter jerk Lili needs him to be. As Hal’s fumbling feet lead them into mishap after misadventure, Lili finds herself stumbling along beside him…right into love.

“Are you sure that’s the one you want, dear?” Ms. Whitehead held out the heavy binder and frowned over her chic, gold-rimmed glasses at Laila Alster. “I have to say, he’s not one of our more popular models.”

Ms. Whitehead flipped a few pages toward the front of the thick sheaf of photos stored in plastic sleeves, then pointed to the picture of a man with blond, shoulder-length hair. His limpid eyes, chiseled jaw and bronzed skin, coupled with the hair and the muscular body, was not at all what she was looking for.

Ms. Whitehead laughed. “Honey, are you sure? Rick is mostly anybody. Take another look.”

Laila smiled politely, but opened the binder back to the page she’d first indicated. “My family would never believe me if I showed up with a man like that on my arm. No, I think–” She paused to read the name on the photograph. “Harold. I think he’ll be perfect for my needs.”

Ms. Whitehead sighed and slid the binder back over her desk, then heaved it onto a bookcase laden with similar binders. “All right, honey, if you say so. Hal doesn’t get much work, poor thing.”

“Why?” Laila asked wryly. “Because he wears glasses, looks like a normal guy and not a muscle bound god of love?”

Misgiving fluttered in Laila’s already churning stomach. “And the other reasons?”

“Hal means well, Miss Alster. He means very well, in fact. He’s one of the more enthusiastic models here at LoveMatch. But he doesn’t get much repeat business, I have to be honest with you.”

Laila swallowed hard, waiting for the bad news. He was a drug addict. He liked to rough up his customers. He had chronic halitosis. What could be so dire that Ms. Whitehead, the LoveMatch goddess herself, could barely bring herself to reveal it?”

“Hal’s a bit clumsy,” Ms. Whitehead said finally with a glance over her glasses that told Laila she wasn’t exaggerating. “And his social skills are a little less developed than we usually prefer in our men. But he’s enrolled in all our courses and is improving quite nicely. I only warn you because you told me how important it was for you to have date for this family party.”

Not just a date, Laila thought. A fiancé. “Social skills. You mean like holding the door open for me and pulling out my chair? Stuff like that? Because that doesn’t really matter. In fact, the less of that, the better.”

Ms. Whitehead looked uncomfortable. She tapped her long crimson-lacquered nails lightly on top of her desk. At last she pulled open one of her file drawers and took out a thin folder. Opening it, she removed a sheet of paper, filled in a few blanks, and pushed it across the desk to Laila.

“Since you seem to have your heart set on Hal,” Ms. Whitehead said, “I’ll tell you what I’m going to do for you, honey. I’m going to give you a free night out with him, compliments of LoveMatch. You can see for yourself if he is the right man to escort you to your family shindig. If it doesn’t work out, you can come back and choose one of our other models. Okay?”

A free night out sounded all right. Laila looked over the paper, which turned out to be a standard release form. She’d read the one included with her information packet already, and so now she signed the bottom with the pen Ms. Whitehead held out. The silver-haired woman then tucked the paper back in the folder, twirled her desk chair toward another set of filing cabinets, and pulled out another file.

“Here’s some background information on Hal,” she said, pushing a sheet of paper over the desk.

There wasn’t much written on it. “Favorite music, “Weird” Al Yankovic?” Laila smiled. She liked “Weird” Al, too, but she wasn’t sure she’d have listed him as her favorite. “Hobbies are reading, bike riding, and going for long, romantic walks along the beach in the moonlight.”

Except for the last, which was so obviously added to spice up his file it was almost laughable, he didn’t sound bad so far. She quickly read further. He’d gone to college, mastered in accounting. So he was good at math. He’d also marked he was currently attending school, but not what for.

“For the initial date, I can make the arrangements for you. You pick the place and time, and I’ll contact your escort to make sure he’s available.” Ms. Whitehead ran her finger down the lines in the appointment book. “He usually is. As I said,LoveMatch will pick up the escort fee, and this time, dinner is on us. But after that–”

“Of course,” Laila said. She thumbed open her phone’s calendar, though she knew her evenings were free. Like Hal, she was usually available. “Wednesday night looks good for me. MJ’s Coffeehouse at the Allen Theater in Annville?”

Ms. Whitehead nodded. “We can have Hal pick you up at home, or if you prefer, you can meet him at the date location. Most of our clients choose to meet their escorts in a public place first–although a good many of them end up letting their dates escort them home.”

Laila ignored the older woman’s wink. She wasn’t hiring Hal to be her sex toy. She needed him to act as her fiancé for one week, during her grandparents’ sixtieth anniversary celebration. She needed him to treat her terribly, act like a total jerk in front of her family, and break things off with her in such a way they’d never ask about him again.

“If I do decide that Hal will work out, can I be sure he’s available for the entire week?”

“Many of our clients have taken their escorts on vacations with them. Most of our men make a very nice living doing what they do. I shouldn’t imagine there’ll be any problem.”

Not for an all-expense paid vacation and a nice fat fee, too. Laila cringed at what this was going to do to her bank account, but getting her family’s attention away from her love life was worth any price. Ian’s insurance money would have paid for a nice exotic vacation or a big screen television. Instead it would pay for a new fiancé.