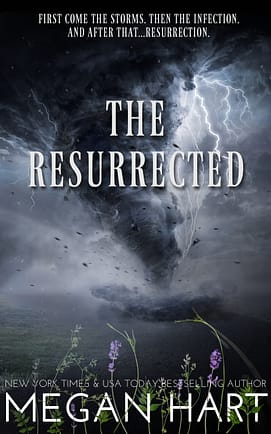 When a series of freak storms sweep across the world, they leave behind something more than devastation. First come the swift-growing flowers, smelling like heaven and dying as quickly as they bloom. Next comes the infestation as the flowers breed and multiply inside their hosts. After that, chaos, mayhem and death.

Abbie dreamed, as she often did, in full color and stereo surround sound. At first her dreamscape was a jumbled mess of faces and places she hadn’t seen for a long time. And then, as in the way of dreams, it all changed.

She was on a train. Going fast. Too fast. She looked out her window at the scenery passing outside, trees and farms and small towns lit up in the night. The train clattered on the rails, too high above everything to be a real train, she knew that even in the dream, but even as she got to her feet and gripped the back of the seat to keep herself steady, she was unable to force herself to wake. And she wanted to, because though this wasn’t yet a nightmare, it felt well on its way to becoming one.

The chug-chugging got louder. The train hissed and steamed. She was riding in a dragon.

The train lurched, and Abbie stumbled forward. Strong hands caught her, kept her from falling, but when she looked up to see who it was she could find nothing but darkness. Something reeked, the stench thick in her nostrils. Choking. It smelled of blood and shit and puke; it was the stink of lying in a ditch on the side of the road in your upside-down car while you waited to die.

The EMTs would load her on a stretcher and take her to the hospital. It would be her first ride in an ambulance. They would not bother with a siren, because she was already gone. There was no white light, no tunnel, no chorus of angels or parade of loved ones waiting for her. She’d left everyone she loved behind her in that ditch, long ago.

Not the voice of God. Not a doctor. Abbie clawed her way up and out of the dreams to find Cal bent over her, his hair so shaggy and in such disarray she moved without thinking to push it off his face. He captured her hand, his grip too tight. Mouth a frown. Expression urgent.

“What?” Blinking, the taste of beer and sex furry on her tongue, she couldn’t focus. He was shouting, she realized. He had to shout over the sound of the train.