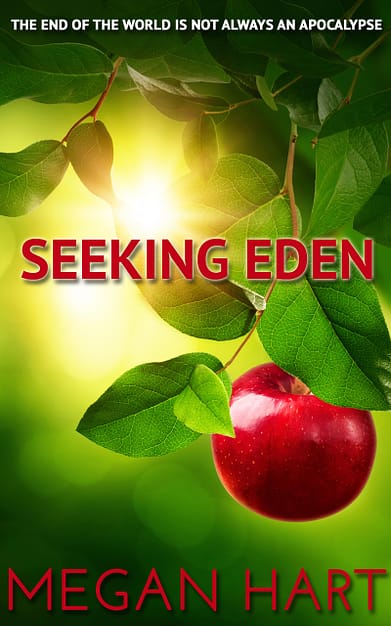 In a world where babies are rarer and more precious than diamonds, Tobin Winter leaves the small town that’s all he’s ever known and sets off on a quest to find a new life.

Elanna is a hopemother, one of the few women in her community able to conceive and bear a child — but never allowed to raise one.

Together, Elanna and Tobin set off to find a new world, one in which they both can thrive.

The bag on Elanna’s shoulder was small and it didn’t hold much. She didn’t have much. The baubles and candies she could claim as her own meant nothing and would be no help on a trip.

The only thing she had that mattered, really mattered, was the tiny dress she wore tucked inside her shirt. The dress her first child had worn for the few short hours of its life. The material was thin and faded now, so worn the pattern of ducks and bunnies had nearly disappeared. Elanna felt it against her skin, and it calmed her. It always did.

In the shadows, she waited with her bundles at her feet. While everyone else was feasting at the banquet, she’d made a trip to the storerooms. She’d probably taken too much, but she wouldn’t be carrying it all alone. Tobin would help her.

She had a lantern and a package of batteries. Some matches. Some cans of food and a jug of water. She’d even managed to find some extra clothes, too large for either one of them, but better than nothing. Everything was rolled inside some heavy blankets and tied with some thick cord. The bundles weren’t light, and they were a little awkward, but overall she was proud of what she had done.

She heard him before she saw him. He was trying to be quiet, but he hadn’t had much practice at it. He was lucky to have gotten this far without being heard.

“You were going to leave without me,” she said from the darkness as Tobin passed by her.

She frightened him. His breath hissed out in a great whoosh, and he fell back against the wall, face white and strained. She tried not to let his harsh tone sting her.

“What are you doing here?”

“Waiting for you,” she said calmly. “Be quiet, unless you want to wake the everyone.”

“Elanna,” Tobin said warningly. “Go back to your room.”

He sighed, running his hands through his hair in the distracted way he had. “I thought we already decided this.”

“Apparently we didn’t decide the same thing,” she said, hoisting the bag over her shoulder. She tossed him one of the bundles and wrapped the cord of the second one around her fingers. “Let’s go. It will be light in a few hours. If we want to get a head start we’d better hurry.”

“I can’t ask you to take on my quest,” Tobin said, holding the bundle awkwardly with both hands.

Without waiting for him, she slipped down the hall and into the main entryway. She pushed open the heavy front door and went into the night outside. The moon was full, its silver light making even the dirt of the streets look somehow prettier. Tobin trailed behind her.

She stopped, turned. “Argue with me later, Tobin.”

He’d managed to sling the blanket roll over one shoulder. He put his hand to her and she took it. “Are you sure this is what you want to do?”

She squeezed his hand and let it drop. Nodded. “Yes. I’m sure.”

“But you’ll be leaving everything behind…”

She felt a brief sting of tears in her throat but she forced them away. “I know what I’m doing.”

He lifted his face to the night air and took a deep breath. “Things smell better already.”

She took a breath and smiled. “I think you’re right.”

He turned around in a slow circle, pointing. “Which way do we go?”

Elanna laughed softly and pointed. “This way. See? It’s a good thing you do have me. You’d never get out of here. You’d be on one of the gatherer’s trucks in a few hours.”

“I’d manage,” he said stubbornly, but he followed her lead. “I was doing all right before.”

“That’s a relief. I’m counting on you to take over from here.”

Bantering with him felt good. They walked easily and quickly along the sidewalk, passing through patches of moonlight broken by shadows from the tall buildings.

“How do you know this is the right direction?” he asked after a few minutes.

She stopped to shift the bag and blanket roll. “I’ve never been beyond 39th street. But Ari told me once that if you keep going past the old bus station, you can reach the tunnel.”

She nodded, starting to move again. The night was waning. When the gatherers grouped to leave, they’d notice Tobin’s disappearance right away. She hoped they’d waste time searching the Main Hall before branching out to the streets.

“It’s collapsed now. You can’t really get through it. But the rubble has been built up enough that you can cross the water. It’s one of the old ways out of the city. Sometimes, when we get peddlers through, they talk about it. It’s not a nice place. I haven’t seen it, but….” She stopped. “They say there are trolls there. But they…they’re wrong, aren’t they?”

Tobin grimaced. “I hope so.”

The answer did not reassure her. “You said there were no monsters, Tobin!”

He shifted his bundles and kept walking. His legs were longer than hers, and he was moving fast. She had to take two steps for every one of his, like she was running.

He looked at her but didn’t stop walking. “I don’t know for sure. I know what I saw, or didn’t see on the way here from Maine, but I’ve never been here before.”

She stopped, glad for the chance to rest but unwilling to say so. “You mean there really could be things out there?”

“I don’t know,” he repeated, and she wanted to pinch him. “C’mon. Let’s keep walking. It’s going to be daylight soon.”