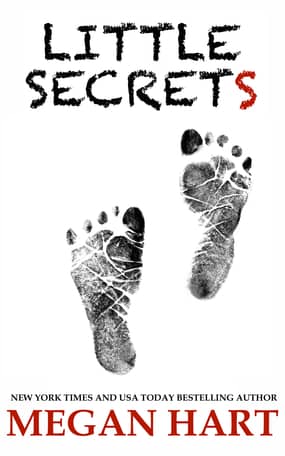 Sometimes what haunts you is not a ghost.

They’re not alone in the house. With a baby on the way and a brand new house, it seems Ginny and her husband, Sean, are on their way to a fresh start. But strange occurrences and financial strain seem determined to keep the couple stuck in the past. Ginny begins to believe the house may be haunted…or that her husband might be trying to trick her into thinking so. As Ginny researches the house’s former owner and the tragedy that happened there, it becomes clearer than ever that something is in the house with them. The question is, who…or what…is it?

The home inspector hadn’t turned up any evidence of rodent infestation, but as she’d discovered when she tried to shower before bed, the guy had also completely somehow missed that the hot-water heater wasn’t capable of providing enough water for a quick shower, much less a luxurious one. Forget about filling the old clawfoot tub in the master bathroom. He’d also passed the fuse box, which was obviously not operating up to standards since the power had gone out once more during the move. Ginny supposed she wouldn’t be surprised if the entire house turned out to be overrun with Mickey and his buddies.

The noise didn’t come again, but between it and the heartburn and the lingering dreams, Ginny was in no way going to return to slumberland. She stuck a tentative bare toe off the bed and felt for the edge of the vent in the floor, hoping for a tickle of hot air. Nothing. The house had been empty long enough that the heat had probably been set at a minimum, and because the temperature had been fine during the day, Ginny hadn’t touched the thermostat before coming to bed. Sean probably hadn’t either. It would’ve been fine if she were still snuggled up under the comforter, but not wide awake with the pizza sitting like a stone in her gut and reflux climbing her throat.

Ginny got out of the bed, which was placed much closer to the wall in this house. Their old bedroom had been bigger, laid out differently, though it lacked the attached master bath and dressing room that had sold her on this house. This room had more windows, one of them a cute dormer she intended to somehow transform into a reading nook or something equally as interesting, if only she could figure out how. Now her hand tapped along the wall and hit open space—the dormer. She peeked into it but saw only darkness and felt an even cooler puff of air on her cheeks. Maybe the window at the end of the narrow space was open or needed some better insulation. She eased past the opening until her hand found the wall on the other side and oriented herself toward the door to the hall, blinking rapidly as though that would make her see better in the blackness.

She hadn’t slept with a night-light since childhood, but wished for one now. All the small details of this house that she hadn’t yet learned threatened to trip her worse than the slippery throw rug. She moved blindly, hands outstretched and feet shuffling along the wooden floor. The hardwood had seemed so appealing in the light of day, easy to keep clean and giving the house such a classic feeling. In the middle of the night, with cold bare feet, all she could think of was putting a rug big enough for the bedroom at the top of her mental “gotta get” list.

She bumped into a tall cardboard box, hitting with both her hand and foot at the same time. It moved when she hit it, lightweight. The wardrobe box, then, one of the few she’d managed to completely empty since the closet here was bigger than their old one and far better equipped with built-in shelving and rods. Sean let out a series of snuffling snorts and shifted, making the bed creak, but didn’t wake. If she remembered correctly, the box was in front of the still-open closet door, which was between the bathroom door and the bedroom door, both of which should also be open.

She’d remembered wrong, obviously, because though she took a couple cautious steps, hands out, she found nothing but air. One more step and her fingertips grazed the wall, found the doorframe. She oriented herself again and discovered she’d also been wrong about the bedroom door being open, when she rammed into it with her face. She’d reached with both her hands, so the muffled thud of her nose hitting the wood wasn’t loud, and she managed to bite back her cry of pain so neither noise woke Sean.

With her palms flat on the wood, Ginny pressed her forehead to the door, eyes watering. Cautiously, she felt her nose, but there was no blood and the pain faded rapidly. Her hand slid down the cool wood to the knob—this one, like the one on the front door, was elaborately constructed of an ornate metal plate, a crystal knob and a real keyhole the realtor had promised was for show, since the door actually locked with a small button on the inside of the handle. Her fingers toyed with it as she twisted the knob, the hinges stuttering.

Sean muttered and snorted again, rolling around and probably tearing all the blankets up from the foot of the bed. Ginny froze, waiting to see if he’d woken. She really didn’t want to wake him. Sean had to work in the morning, which felt like it could be a million or only a few hours in the future, she had no idea since she hadn’t looked at the clock. And more than that, if she woke him, he’d want to make sure she was all right. He’d want her to stay in bed while he went downstairs and checked the thermostat, or brought her some water, or rubbed her feet, or rummaged around in the boxes in the bathroom to find her some antacid.

The last thing in the world Ginny wanted right now was to have Sean hovering over her, no matter how good his intentions.

More cool air washed over her as she eased herself into the hall. She took a second or two just to relish the fact they had an upstairs with a hallway—their townhouse had been two-story but the second floor had been completely made up of their bedroom, a tiny guest room and shared bathroom. This house was so much bigger, so much a real house, not some rinky-dink starter home. Ginny took the time to savor this, until her teeth chattered harder and she had to wrap her arms around herself to keep warm.

It seemed they’d been looking at houses forever, unable to make the leap, until the housing market made it impossible not to go for it. They’d looked at this house four times before making their offer. The seller had accepted immediately without haggling, though they’d come in low the way the realtor had suggested. Four times Ginny had toured it, making sure she could imagine herself in just this spot, before she felt she could commit to it for what she knew didn’t have to be the rest of her life, but surely felt like it.

Standing outside her bedroom door now, Ginny could imagine the placement of every other door. Six of them—four other bedrooms, empty because they didn’t have enough furniture to fill them. A bathroom, inside which she could still hear Noodles’s faint, annoyed meowing. A linen closet. In front of her, the railing surrounded the open space around the stairs, with the entrance an equidistant walk to the left or the right of her, depending on which way she felt like going. The movers hadn’t closed the doors after putting the labeled boxes in them, and some light filtered in through the one directly to her left. Blinking, her eyes adjusted to the dark. She could make out the faint shapes of open doors, a window at the other end of the hall.

On the far side of the hall, something in the shadows moved.