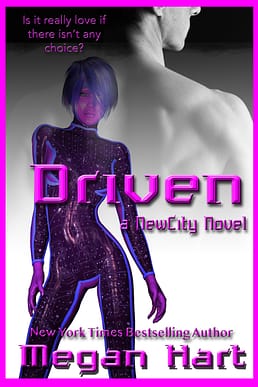 In this searing addition to the Newcity world, Linna Fortense is a mecho posing as a Pleasurebot to avoid persecution. When the Newcity raids begin, her only option is to escape through the dome along with Del, the hovertaxi driver who’s befriended her.

Del thinks of Linna as more than a friend, but there’s on problem with taking their relationship to the next level. Xanderrans mate for life. When a deceitful spaceship captain tries to force Del to become part of her harem, Linna manages to take her place, bonding herself to Del instead.

When they end up on his home planet though, and Linna discovers Del is more than a simple taxi driver, the most important question of all is put to both of them:

Is it really love if there isn’t any choice?

Linna Fortense’s stomach took the same low, rolling tumble it always did at the sound of that familiar deep voice. “Hi, Del.”

Del had been leaning against the side of his battered hovertaxi. Now he stood upright and opened the back door for her. “C’mon. I’ll take you home.”

She thought of the long hours she’d just finished working and the three stingy clients who’d barely made it worthwhile. Then she thought of her empty credaccount and her emptier stomach. She looked longingly at Del’s taxi, but shook her head.

“Thanks, Del, but you don’t have to. I can walk.” Linna forced a smile she definitely didn’t feel. Her feet, crammed into tottering high heels, hurt. Even taking the pedtread most of the way meant she’d have to be on them for another twenty minutes. Still, she didn’t have the credits to pay for Del’s services tonight. Not if she wanted to eat tomorrow.

He flashed her a grin designed to melt even the most stoic of feminine hearts. “C’mon, pretty lady. No charge.”

For one horrible moment, Linna thought she might weep at his kindness. “I can’t ask you to do that.”

Del spread his arms and gave an exaggerated look around. Dawn was just beginning to rise over Newcity. Most of the casual Lovehut traffic had already gone home, while the hardcore patrons wouldn’t be done for hours.

“You see anybody bugging me for service? Nah. I got to get home myself. I live over in Caldyx Heights. Might as well give you the ride you need.”

She knew he didn’t mean that the way it sounded, but that idea was as tempting as the free ride. Linna took in Del’s broad, muscled chest and arms. Unlike her three clients, Del didn’t wear the artisilk jumpsuit or tunic shirt so fashionable right now. An old-fashioned, articotton t-shirt, unnervingly white, clung to every curve and ripple of his upper body, while plain dark tight-fitting trousers hugged equally muscled legs. Add that killer grin to the firm body, and his offer was one any woman would jump at.

The problem was, Del didn’t know she was a woman. Linna forced her gaze away from his chest to meet his eyes. His grin told her he’d noticed her staring. Years of self-control had taught her not to blush, but heat flooded her body anyway.

“I meant let me take you back to your place.”

“I know what you meant.”

Del tilted his head toward the cab. “Get in, Linna.”

She sighed. “You always have to have your own way, don’t you?”

He spread his hands and shrugged. “So my Ima always told me.”

“Thanks, Del.” Linna got in the back of the hovertaxi with a sigh of relief so loud it made Del laugh from the front seat.

He turned to look at her over his shoulder. “Where to?”

She was taking him up on his offer of a ride, but that didn’t mean she had to take advantage of his generosity. She named a kennel in the same district as Caldyx Heights. Besides, that kennel was as good as any.

His dark eyes crinkled at her in the rearview mirror. “Don’t you usually go to Frederico Fucktini’s?”

“You’ve driven me way too many places, Del.” Linna laughed despite how weary she felt. She had gone to Freddy’s before, but his fees were higher than at Kitten’s, which had used to be high-class but was now a low-service facility and charged accordingly.

She caught him looking at her again, his dark eyes intense even in the reflection. Then the hovertaxi lifted off with a minimum of bucking and groaning, and Del eased into the light morning traffic.

Linna looked out the windows at the pedtreads, where Newcitizens who worked the early shifts were already congregating. Their day began as hers was ending. She peered further out the window, up to the sky. She couldn’t actually see the sun, not with the electrical-chemical Dome protecting Newcity from damaging ultraviolet rays. Linna wondered sleepily what it looked like, what the sky and stars looked like. She’d never been out of Newcity, not even to an Offworld vacay. Not even when she was married…before…

Linna awoke with a start when the hovertaxi slowed abruptly. She hadn’t meant to doze off. She scrubbed at her face furtively and cursed her lapse in self-control.

Del must have seen her sleeping, but he said nothing, only slid the taxi into the open space in front of Brenda Kitten’s SexKennel.

Linna stifled a yawn with a wide grin out of force of habit, but her mind was whirling. She’d been exhausted, but that was no excuse. She’d fallen asleep in front of a witness. Del was a friend, at least as much of a friend as Linna could afford to have, but her mistake could prove just as fatal with him as a witness just as well as a stranger.

“Thanks,” she said, her voice hoarse.

Del got out of the cab at the same time she did, and held her door open while she climbed out. He shut it gently behind her, and with a firm hand on her upper arm, helped her over the curb and onto the sidewalk. Linna’s bare skin tingled from his touch.

“How many customers did you have last night?” He cut right to the heart of the situation.

“None of them upperrankers, I’m guessing.” He jerked his chin toward the kennel behind them. Its flashing neon sign showed a penis penetrating a vagina over and over. “Not if you’re recharging in Kitten’s. That place is a dump.”

“If I thought you could afford to pay me with credits, I’d take them from you,” Del said. “Believe me, Linna. I’m not too proud to turn down money. I could use some.”

The sound of his voice saying her name sent another chill skittering over her. Her nipples stiffened through the thin material of her artivinyl tube top, and her thigh muscles twitched. She didn’t allow any of her customers to use her name, didn’t even give them it. To them, she was simply another Pleasurebot, a KMPN-2017-F. She didn’t need a name.

“Not much call for a Kompanion these days,” she said. “Not with all the other models on the market.”

His dark eyes looked at her steadily. “Anyone who’d choose one of those dumbass PSSY 100′s over you is an idiot.”

Her smile was real this time. Del could always draw one out of her. “Thanks.”

She looked over toward the kennel. In the light of day, it looked even less appealing, but her eyes were heavy and she really needed to get to a safe place where she could close them. “Well, I guess I’ll see you tonight?”

He nodded, his face serious. He kept his dark hair cropped close to his skull, not enough for a woman to run her fingers through at all, but suddenly that’s exactly what Linna wanted to do. She wanted to lick his full mouth, nibble at the strong line of his jaw, taste and touch and explore his entire body. She’d spent the night advertising for sex and being fucked by strangers, but it had left her body unsatisfied. She wanted to bring a man to an erection while he moaned her name, not while he transferred credits to her account.

Her emotions rocked her, and she took a deep breath to steady herself. This was no time to let her hormones overwhelm her. She was tired and drained, and her body was betraying her.

“Good night, Del. And thanks again. You always come through for me.”

They stared at each other a moment longer. She remembered the day she’d first met him. Two years before, a client had tried to pay her with a faulty credaccount number, then ran. Del had heard her shouting and chased the man down for her, then brought the thief back dangling from one huge fist.

“I have a soft spot for ladies in distress,” he told her now. “Good night, Linna.”

He shrugged. “Nah. Go inside and recharge. You need it.”

On impulse, she stood up on her toes and kissed his cheek. It was a mistake. He smelled too damn fine. Her lips lingered a moment too long before she pulled away and started toward the kennel door. Del reached out and snagged her upper arm easily.

“Wait,” he said in the rumbling deep voice that threatened to send her flat on her back. “I changed my mind.”

Her heart stuttered for a moment before the pacemaker forced it back into its rhythm. She turned, struggling not to betray her body’s excitement. “How much do I owe you?”

Sex. Oh God-of-Choice, he was going to ask her for sex. Linna had a lot of enhancements, but an automatic climax button wasn’t one of them. However, at the thought of fucking Del, her pussy contracted in a spasm of pure lust.

“Barter?” she asked, made stupid by the unaccustomed lust surging through her.

In the two years she’d known him, it was a rare day when she didn’t see him. She’d spent more time with him, on and off, than she had with any one other person since before her accident. She knew Del’s favorite beer, the Donball teams he favored, which routes through the city he preferred.

He’d never once, in all that time, ever suggested she pay him with her body. Now, his eyes traveled slowly over her mouth, down her neck, over her breasts, belly, then fixed for a moment between her thighs. His tongue swiped his lower lip in a movement so sensual it took her breath away for a moment. Her knees, despite their titanium-alloy ligaments, went weak.

Had she heard right? Linna shook her head slightly. Her hearing was enhanced, as was her vision. She couldn’t have misunderstood him. “A…kiss?”

Del pulled her closer until her body molded into his like it had been manufactured to his specifications. “Sure. Is that all right?”

He didn’t wait for an answer, only tilted his head and slid his lips along hers. His mouth was lush and warm, and the full lips soft. Her mouth opened, and he slid his tongue inside.

Linna’s body grew warm as Del’s hands fitted themselves to her waist. She leaned into his embrace, lost herself in it, and let him take her away with his lips and tongue and fingers.

Then all at once he had moved away, and Linna opened her eyes. She forced herself to breathe. Del’s eyes still smoldered with passion, but he stepped back toward the hovertaxi.

“See you tonight,” he said, and got in the vehicle without even a backward glance.

Don’t miss the rest of the NewCity stories!


“Intriguing characters pulled me in immediately,

Not Frankenstein, but Fr

What's a fact about y