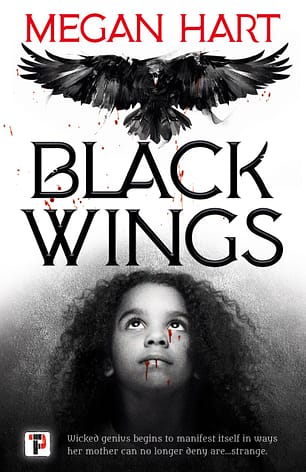 There hadn’t always been something wrong with Briella Blake, but when she’s invited to attend Parkhaven, a private school for extremely gifted students, the girl’s wicked genius begins to manifest itself in ways her mother can no longer deny are…strange.

Briella’s friendship with a raven, Onyx, that’s equally as smart as she is, prompts her mother to restrict the animal from Briella’s company. Soon Marian learns that nothing can stop her daughter from interacting with the bird, who seems to have become an integral part of the girl’s experiments into the possibilities of recording and recreating personality and memory, as well as the existence of angels, the afterlife, and the soul.

Marian’s pregnancy with a sibling Briella doesn’t want spurs the girl further into a frenzied activity of experiments and desperation. Soon, it’s impossible for Marian to ignore that although there hadn’t always been something wrong with Briella, something is certainly wrong with her now. Certainly even a child genius can’t be blamed for the unexpected deaths and sickness surrounding her. Even the idea that the raven has become some kind of paranormal instigator of tragedy is too ridiculous and idea for Marian to entertain. But when her pregnacy turns difficult and begins to sap her strength, it’s all Marian can do to keep herself out of the hospital, much less torture herself with worry about the daughter who’s never caused trouble before.

A mother’s worst nightmare might be something terrible happening to her child – but what happens when the terrible thing IS the child?

It had been a while since Marian had run the vacuum upstairs. Hauling the heavy machine up the narrow staircase was a pain in the ass, and with Dean sleeping during the day, Marian usually tried not to make too much noise. Today, though, it was time. With Briella putting herself to bed, it had been weeks since Marian had been upstairs, but last night she’d taken up some laundry and noticed the rugs were gritty with dirt. The hardwood floor wasn’t much better.

Briella was supposed to keep her room at least tidy – toys and books put where they belonged, clothes in the dresser or the closet and not on the floor, the bed made. Marian had low expectations of how competently any of these tasks were completed, but she did expect some kind of effort.

What she’d walked into this morning was a disaster. It hadn’t been such a mess even the night before, but now Marian had to actually pause in the doorway to make sure she was seeing things right. The entire room had been trashed.

“Damn it,” she muttered.

Briella had been late coming down for breakfast. Marian had needed to call her several times before she did. What the hell had she been doing up here this morning? Or, Marian thought with a slow spiral of unease uncoiling inside her, all night long?

Had the girl looked tired at breakfast? Marian had been too concerned with the tangled mess of her hair, the fact she was refusing to wash her face or brush her teeth, that she was trying to get away with wearing a dirty uniform instead of the clean one Marian had directed her to. All of that had taken Marian’s attention, but if she thought hard, hadn’t it seemed like Briella was more than just reluctant to obey, but working against exhaustion?

She looked around the room again. It was easy to imagine Briella roaming the room all night long, destroying it. What Marian could not imagine was why.

“This intriguing twist on the chosen child in an elite school trope confronts the reader with a number of unsettling questions that will linger long after the final page has turned.” — Publishers Weekly

“Think an evil Matilda, or Girl With all the Gifts meets The Omen and you’d come someway close to the level of creepy child genius that is Briella!” — Gem, on Netgalley

“As Black Wings is more thriller than horror, it has more in common with The Bad Seed than The Omenand it cleverly shrouds the direction the plot heads into, developing tension and making it very easy to read.” — Tony Jones, HorrorDNA.com

“I loved this story!…At first, the story seems to be one that’s been done before, i.e., a super genius child who become evil and does some wicked things, but Megan Hart took the ‘trope’ and made it her own.” — S. D. Vassallo