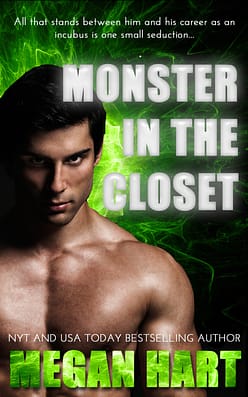 Tessa Hanson’s always had what she wanted, how she wants it. But when the naked man shows up in her closet and says it’s his job to seduce her, can Tessa let go long enough to let him?

Magnus isn’t cut out for fairy dust and rainbows. He’s aiming for better things. But in order to do that, he has to complete just one task. All that stands between him and his career as an incubus is one small seduction…

Tessa Hanson had a naked man in her closet. She peered downward. A very well-endowed naked man. She blinked, and then blinked again. He didn’t disappear.

She closed the door and stared at it for a moment. She heard the rattle of hangers and some muffled thumps. When she opened it again, he was still there.

Dreaming. She had to be dreaming. With a shake of her head, Tessa tried to close the closet door again. This time, the naked man put a large hand between the door and the jamb.

“It doesn’t matter who I am,” he said. “Look, just go back to bed and let me try again, okay? Only this time, wait until I’ve opened the door the whole way before you wake up.”

This was really too much. Tessa gave a narrow-eyed squint toward the faintly glowing clock on her bedside table. It was way, way too early in the morning for her to be awake. She put her hands on her hips and faced the intruder.

Hung like a horse or not, this guy was working her very last nerve. “What?”

With a backward glance, the man catapulted himself out of the closet and kicked the door shut behind him. The force of his flight knocked Tessa over, and they both fell onto the bed. Tessa found herself with a face full of fragrant male chest, complete with curling dark hair and rippling muscles.

She gave his skin an experimental lick. Yum. He tasted good, too. She reached around and gave his firm, muscled ass a squeeze.

“Hey!” The man rolled off her and jumped up. “Stop that!”

Tessa sat up and scrubbed at her face. She looked at the clock again. Two more minutes had passed, bringing her two minutes closer to the time her alarm would ring.

“If this is one of those sex dreams,” she said pleasantly, “do you think we could get started? I have an early appointment tomorrow morning.”

“Dream?” It appeared she’d stunned him. His eyes flashed, reflecting the green glow from her clock. “No! This–you don’t understand.”

Annoyed again, Tessa crossed her arms over her chest. “Then what the hell, exactly, is going on? I wake up because I hear something in my closet, and I find you. Naked. It’s clear to me this can’t be really happening, so of course I assume it’s a sex dream, especially since you just threw me down on the bed.”

His dark hair fell in silky-looking lengths to his broad shoulders. The kind of hair a woman would like to feel drifting across her thighs, Tessa thought. The last few men Tessa had dated wore business suits, kept their nails trimmed, used hair products, worked out.

Metrosexuals, she thought the term was, for men who required as much, if not more, personal care than the women they dated. This sleek, muscled hunk with the Samurai hair and burning gaze was just what she’d been missing.

“If it’s not a dream,” she said slowly, “then what were you doing in my closet?” What a drool-worthy body.

The intruder began to pace along the side of her bed. Nice pecs, to-die-for abs, an ass she’d already discovered was perfectly made for squeezing. Long, muscled legs, and yep, she peeked down toward the floor. Nice toes.

He’d said something, but she was so caught up in her appraisal of his body, Tessa hadn’t heard it. “What?”

“I’m supposed to scare you,” he said rather miserably.

“Scare me?” She looked him over again, taking the time to really check out his package. Damn. His kickstand could’ve held up a Harley. “Naked?”

He looked down, as if just noticing. “Oh. Crap.”

“You didn’t know you were naked?”

He looked up and his eyes met hers. They were green, she realized. Not emerald, or jade, not even grass green. Glowing green. Like the numbers on her clock.

“I forgot to put on the uniform.”

“Uniform?” Tessa shook her head to clear away the cobwebs. She got to her feet to confront him. “What are you talking about?”

He sighed heavily. “I’m the monster in your closet.”

Surely she hadn’t heard correctly. “You’re the what in my what-what?”

He looked at her like he was defying her to contradict him. “I am the monster in your closet. I’m supposed to scare you. Only I forgot the uniform because I was running late. I figured you wouldn’t know the difference–that I could just scare you and leave, collect my pay and be done with it. But you didn’t get scared,” he said accusingly. “And now I’m screwed. I’m going to have to go back to sprinkling fairy dust and painting rainbows, and let me tell you, lady, there’s no fucking future in rainbows.”