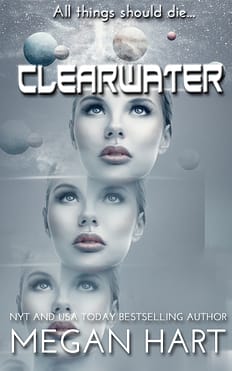 Clearwater Station is home to Victor Clearwater, inventor of the artificial life technologies that changed the world, and his ward Elsa Witherspoon. When Frederick arrives with the goal of stealing Clearwater’s research to pay back his father’s debts, he discovers the lovely young Elsa is not what she appears– and Clearwater Station is a house of secrets and lies. People want to use Elsa for their own gain, but first Frederick must figure out who and what she truly is in order to save her, and himself.

Frederick had watched from the shadows as Miss Elsa had been petted and cooed over by the master’s guests. He’d heard what they said under their breath, though, when she’d moved on to the next guest and they had only themselves to speak to. He’d known for a long time how snide the wealthy could be, but hearing them dissect every piece of Miss Elsa from her hairstyle to her gown, of which she was so obviously and charmingly proud…well. That left him with a curled lip and a strong wish he’d taken Cook up on more than one offered swig from his flask.

People were so consistently and casually cruel, Frederick thought. So deliberately and unnecessarily unkind. It made it only a little better that they saved their criticism of the girl until she’d turned her back.

He’d started feeling rather protective of her.

That was why when he saw Miss Pamela cut the girl from the crowd, he thought to follow. Whatever game was afoot here, it centered on Miss Elsa. He’d heard of parties like this, of role-playing stations where the hunt was not animal, but human. Everything here was strange, and he didn’t trust any of them.

He’d been right not to, that had become clear as soon as he slipped from the door onto the roof and saw the table set out. Wine, sweets. A rooftop balcony. There was an entire party, tables groaning with food and dozens of guests in the rooms below, and this was where the older woman had taken Miss Elsa? It smacked of betrayal of some kind, and though Frederick had never had the fortune of falling in love or even suffering any serious entanglements, he knew very well how women could betray one another over the simplest of perceived crimes.

“Is it pretty?” He heard Miss Elsa say.

Frederick watched the older woman draw the younger by the sleeve toward the wall. He could hear the murmur of Miss Pamela’s words, though not make out exactly what she was saying. He did hear Miss Eve’s sharp gasp, though.

She half-turned, her expression horrified. “…What is this?”

“That, my dear, is the truth.” Miss Pamela stepped back, away from the other girl.

Miss Elsa shuddered. Her small, delicate hands gripped the ledge along the wall. She looked over it, then gave a glance over her shoulder at Miss Pamela.

Then, before Frederick could do more than take a single step forward, Miss Elsa hauled herself up onto the ledge. Without time to think, Frederick ran to catch her by the back of her dress before she could fall…or jump.

Together they tumbled backward onto the terrace floor in a tangle of arms, legs and skirts. She fought him, stronger than he’d have expected her to be. She ended up on top of him, her teeth bared and snapping at his face, her eyes wild, a crazy woman. Frederick did the only thing he could think of to keep her from biting off his nose. He slipped a hand around the back of her neck and found the three small buttons at the base of her skull.

He rolled her carefully to the side so he could get out from beneath her. She lay quiet, eyes open, mouth still contorted though the grimace was slowly softening. His stomach twisted as he got onto his knees beside her, checking to see if she were breathing, if her heart still beat. He’d done a hard reset, and what if he’d ruined something inside her brain?

“What have you done? You idiot,” Miss Pamela said from beside him. “Infinite stars. Really?”

He looked up at her. “I…she was about to kill herself!”

“It wouldn’t have been the first time,” Miss Pamela replied flatly, then shrugged. “I’d hoped this time, at least, she’d have been a bit stronger when confronted with the knowledge, but sadly, no. I can try again.”

“Is that the game, then? I knew it. What is it? You goad her into suicide? Is that how you win? What’s the prize? What amount of credits could be worth it?” He stopped, watching her bemused expression. “What do you mean, it wasn’t the first time? She was about to jump off the ledge. That would have killed her body, worse than a hard reset of the hard drive in her head!”

Frederick spit without turning his head, so that the gobbet of glistening fluid hit the ground by her hem. Miss Pamela’s eyebrows rose. She delicately flicked her skirts away from him.

“You’ve no idea, offal boy. As for Elsa, don’t worry so much about it. She’s been backed up, I’m sure. Oh, Victor will fuss and moan, I’m certain, but truly, there’s no need for it.”

“Backed up…she’s not…all of you here are monsters,” Frederick breathed. He thought of the day in the school room, when Victor had insisted on the hard reset. Now this, and he’d been the one to do it. “She’s a person, not a mecho. You can’t simply restore her from a backup!”

Miss Pamela let out a series of trilling laughs. “Oh my dear boy. Oh, my. That’s where you’re wrong, you see. Miss Elsa? She is not a person.”

Cold washed over him. “What?”

She gave him a long, assessing look. “Miss Elsa is not human, offal boy.”