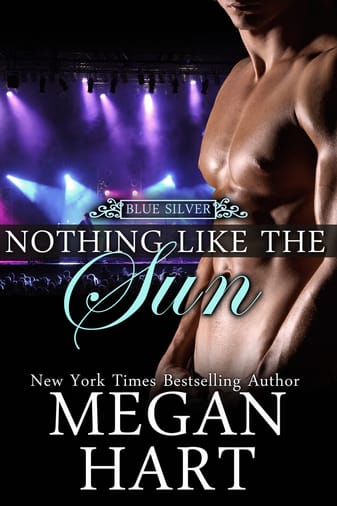 Twenty years ago, the Silverettes never made it to the big Blue Silver concert. Now the band’s back together for a reunion tour and Georgie Davis is determined to bring the fan club back together for a concert. But Georgie has another reason for wanting to see the boys play–pure, unadulterated sex. Her last relationship ended a while ago, and Georgie needs a change. With lessons from an 80-year-old former whore and hours of study to help her, Georgie plans to seduce the band’s easiest mark, keyboard player Julian Manchester.

She wants only one night of passion and poetry…but one night turns out to be not enough. For either one of them…

Georgie Davis was coming out. Not of the closet, or at a debutante ball. No, Georgie was surging out of her push-up bra.

“Big change from six months ago, huh, sweetheart?” Esther Feinman gestured with her ever-present cigarette clutched in one gnarled hand. “Remember, honey, the garter belt should go under the panties, if you want to be able to take them off in a hurry.”

“Right, right.” Georgie snapped the garters, then cupped her breasts, pushing them upward. “I look like I’ve got a set of grapefruits on my chest! With maraschino cherries on top.”

Esther laughed. “Well, honey, it’s pretty much a proven fact—if you want to catch a man’s attention, you gotta lure him with food or your titties. Grapefruits topped with maraschino cherries would do the trick, either way. I’m going to make some coffee. You want some?”

Still studying her reflection for flaws, Georgie nodded. “Sure, thanks Esther.”

Alone in front of the mirror, she sucked in her breath and struck a pose. Then another. Not out of vanity, though anyone watching her might have thought so. No. Georgie was merely evaluating “the look.”

Esther didn’t know about Joe, or the accident that had put him in a coma for three months. She didn’t know how Georgie had sat by his bedside that entire time, giving up friends and career advancement to be there for him, certain he was the man she was meant to marry. Esther particularly didn’t know that Joe, once recovered, had left Georgie for his physical therapist, a fit young blonde named Nancy, who could lift twice her own body weight and smelled constantly of menthol ointment.

All Esther knew was that Georgiana Davis wanted to learn everything about being a top-class whore and had come to Esther to learn it, at the very reasonable price of weekly chauffeuring to the grocery store, cartons of Pall-Malls and boxes of Krispy Kreme doughnuts. So far, it had seemed worth every penny.

Georgie pursed her lips and blew her reflection a kiss. “If you can’t get Julian Manchester into bed, you’d better give up sex for the rest of your life.”

Esther didn’t know about Julian either, or Georgie’s plan to seduce a man she’d been in lust with for twenty years.

Georgie gave herself another once-over from carefully coiffed hair to red-painted toenails. She might look different, but the funny thing was…she didn’t feel very different. She still felt like the same squeeing fan-girl she’d been twenty-plus years ago when a flat tire had waylaid a girlhood dream. Georgie and her friends, The Silverettes, had never made it to the first Blue Silver concert they’d planned to attend. Now, though, the band had reunited for a reunion tour, and Georgie didn’t intend to miss a second chance.

“You all right in there?” Esther’s voice floated down the hallway.

Georgie had to be back at the library in forty minutes. People would look at her a bit funny if she showed up dressed like this. She grabbed up her clothes, a plain, dark shirt-waist dress that left everything to the imagination, and dressed quickly, trading spiky heeled pumps for a pair of casual loafers and putting her platform heels back in her bag. She smiled, looking around the room where she’d spent the past six months getting ready for what she hoped would be the night of her life.

The news of the tour had been tucked away on an internet gossip blog between stories about one young starlet’s anorexia and a certain big Hollywood actor’s alleged plastic surgery. A small snippet, without even a paparazzi photo beside it. She almost missed it in scrolling through the site, but a name, Julian Manchester, caught her eye and she was hooked. She’d spent the next four hours Googling Julian and the boys, reliving the old crush and playing “Her Eyes” over and over again.

They’d done a lot in over the past couple of decades, though none of it rivaled the band’s heyday, when pink hair and lip gloss had ceased to be the realm of women only, and zebra-striped spandex pants were considered “awesome.” Julian had recorded an album of classical music. The other lads had worked on their own varied pet projects.

Now the boys from Britain were getting back together to do a tour of small clubs to promote their new CD, Renewal. An acoustic tour, stripped down, nothing like the grand arena days when thousands of screaming girls had danced themselves to exhaustion.

It had taken some work to put it all together. Calls to Cassie, Marcy, Lissie and Faith, the original fan club. Emails. Pleading. Begging. Georgie hadn’t quite made it to bribing before Cassie caved and agreed to use her connections to arrange for the band to kick off their tour in Harrisburg. That it would benefit the charity Ten Steps to the Moon was a bonus.

That it would get her into Julian’s bed was a secret.

See the Other Stories:

Behind the Mask
by Jody Wallace

Arliss Pacifica Edgeworth, poor little rich girl, made friends in high school by pretending to be somebody she wasn’t—a huge fan of the pop band Blue Silver. After she attempts to use her Daddy’s money to treat her friends to a once in a lifetime Blue Silver concert and the limo breaks down en route, she and her friends drift apart.

Flash forward a couple decades and Arliss gets a call about a second chance at the concert of a lifetime on the Blue Silver reunion tour. A very special concert, where the former “Silverettes” can attend an after-party with the band members themselves. Should Arliss risk showing her friends…and any sexy band members who happen to be entranced by her foul mouth, bad attitude, and big ass…what’s really behind her mask?

Cassie Bryant didn’t let a flat tire deter her 20 years ago. As soon as she hit 18 and graduation, she took off after pop band Blue Silver, determined to make lead singer Seth Graham her future. It worked—until pressure, drugs, and a tanking final album tore apart not only their marriage, but the entire band.

Now Blue Silver is making a comeback, and Cassie’s friends want her to use her connections to bring the band to their hometown so they can live their aborted dream. Against her better judgment, she agrees. But will the concert and after-party create the magical night they’d always wanted? Or will her friends face the same disillusionment she did?

Worse, when Seth wants to reconcile, she finds it difficult to resist…despite the same pressures and temptations that ruined them last time.

It’s been a year since Blue Silver lead singer Seth Graham convinced his ex-wife Cassie to reconcile. But as the date of their second wedding approaches and Blue Silver’s success skyrockets, old problems are twisted by new realities that threaten the fragile relationship they’ve rebuilt—especially when Seth’s fears manifest in sexual dreams…about his best mate, Julian Manchester.