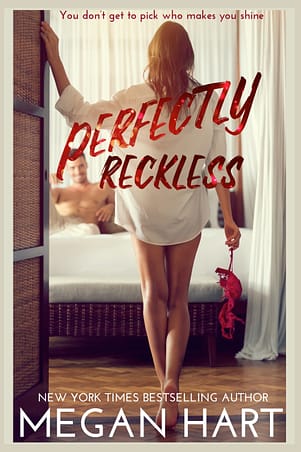 When love is determined, it will always find a way. From New York Times bestselling author Megan Hart comes PERFECTLY RECKLESS, a new novel about love, lust, loss and rediscovery between two people who should never have fallen in love…or out of it.

Maura pushed up on her elbow to look down at him. There might come a time when she was no longer overcome with love at the sight of his face, or when her love might become something soft and faded and worn. But to stop loving him? Impossible.

“How would I live,” she murmured, “without my Ian?”

Tenderly, she stroked the hair from his forehead and kissed his mouth. He woke with a start, looking guilty. Maura sat, thinking she should start looking for her clothes. She was getting a chill.

Ian sat, too, saying nothing as she pulled on her panties and bra, then her t-shirt. She watched him carefully as she turned her jeans right-side out, but didn’t put them on. She knelt beside him.

She’d never been in his bedroom, though she’d seen it often enough in their video chats. The easy compatibility they’d shared while making dinner and the synchronicity of their lovemaking stalled here. Ian pulled a pair of boxers and a t-shirt from a drawer to give her.

“You can use the bathroom first,” he offered. “Umm…I have an extra toothbrush for you.”

In bed, she curled on her side, facing out. Ian lay on his back beside her. The soft, slow rasp of his breathing soothed her, but she couldn’t sleep. All this time, and they’d only slept together once. She didn’t know if he liked to be cuddled or preferred his space; she didn’t know if he would mind if she tossed and turned for a few minutes while she tried to get comfortable with a pillow she wasn’t used to.

“Are you sleeping?” His whisper eased over her in the darkness, so quiet it made her smile because he was clearly trying not to wake her, if she was.

The bed shook as he moved closer to her, pulling her against him. His breath warmed her neck. His hand fit naturally just below her breasts.

“It will be okay, Ian,” Maura said sleepily, relaxing against him. “Everything will be okay.”

But it wasn’t. She fell asleep with his arms around her and woke when he moved away from her. When he swung his legs over the edge of the bed, she sat up too.

“Don’t do this,” she said. The only light came from the moon shining through the window. It made him a shadow, indistinguishable from all the others except that he moved and the others stayed still. “Go to sleep.”

She scooted closer to him. He didn’t cringe from her touch when she curved her body around his and put her chin on his shoulder. She put her arms loosely around him, linking her fingers at his chest. She gave him her warmth and the beat of her heart. According to George Orwell in 1984, if you loved someone, that’s what you gave him even when you had nothing else. Love.

Maura gave Ian her love, and somehow, it wasn’t enough.

“It’s just that…I’d rather it end now than later.”

Maura sighed, weary, but giving him the room to say what he needed to say. “Why?”

“Are you ready for it?” She asked a little too harshly. “Is that what you want, Ian? For me to go, now. For this all to just…end?”

“Before it leaves scars,” Ian said in a low voice.

Maura snorted softly against him and kissed the back of his neck. “Too late, sweetheart. Way too late for that.”

He half-turned. He could’ve kissed her mouth, had he twisted just a little more, but she didn’t press forward. “I’ve never felt this way about anyone. That’s all. I just don’t think I can do it.”

You’re doing it, she wanted to say. You’ve already done it.

Instead, she withdrew from him. Quietly, without fanfare, she gathered her clothes and stripped out of his. She dressed and pulled her hair up again. Ian sat on the bed, watching her, though how much he could see in the dark she didn’t know. When she’d finished, Maura went to him. She took his face in her hands and tipped it up so he had to look at her. There was enough light for that, at least.

“I love you,” she told him. “But you’re right. Eventually, that leaf has to let go.”

“Me too.” She thought about kissing him, this her last chance, and couldn’t bring herself to do more than brush her lips on his. Straightening, she let go of him. “I’ll let myself out.”

She couldn’t let him. She would break down and he would see it, and she’d be ashamed. Or worse, she would cling to him, weeping and begging. She would lose herself utterly in this grief already threatening to claw its way up her throat and out her mouth in wails and cries.

No. She would walk herself to the door and let herself out, and she would get in her car and drive herself home. There she might break down, in the safety of her own shower where she could scream and pound her fists. But not here.

In his kitchen though, as she gathered her keys, Maura paused to write a note. Simple. One sentence. She didn’t sign her name.

She left it on the table, and she left him.