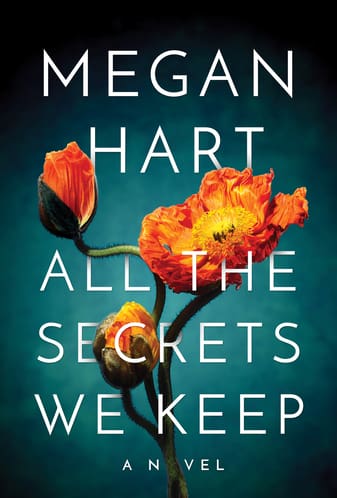 In the riveting conclusion to Megan Hart’s passionate new family drama, the secrets they keep are no match for the truths their hearts will never let go.

Still stuck in his small Central Pennsylvania hometown, Ilya Stern is used to feeling like a disappointment. After his high school girlfriend, Jennilynn, drowned, he married her sister, Alicia, only to divorce a decade later. The business they started together is threatened by a luxury development—and Alicia has already sold her stake. Now that Babulya, Ilya’s gentle Russian grandmother, has died, there’s no one left who believes in him. Or so he thinks.

Theresa Malone was Ilya’s stepsister for only a year, until his mother threw her pill-popping father out of the house in the middle of the night, forcing teenage Theresa to follow. Now she’s returned for Babulya’s funeral—and to facilitate the quarry-development deal. As she tries to convince Ilya to sell, she realizes her feelings for him have ignited—from sisterly into something more.

Working together closely, Ilya and Theresa struggle to define their intense attraction. When the details of Jennilynn’s death surface, will Ilya and Theresa’s deep connection keep their hope for the future afloat—or submerge them once and forever in their tragic past?

By the time they pulled up in front of his house, the whiskey had settled in his gut with a low, roiling reminder that he meant to quit drinking any day now. Ilya didn’t feel drunk, but that was part of the problem. He hardly ever did, not until he got out of the car and the ground tilted under his feet so that he had to grab the door to keep from tripping.

Ilya turned his face to the sky for a moment, letting the late-night rain tickle his closed eyelids. He opened his mouth, tasting it. So maybe he’d die from the poisons in the water, whatever. Something else could kill him first, and worse than that.

“Life,” he said aloud like an answer to a question Theresa hadn’t asked. “Life’s what kills us.”

“Oh my God.” She sighed, and he looked at her. She’d gotten out of the car and was leaning on the roof. Her hair—that cloud of soft, dark curly hair—was getting wet. She pointed at him. “You need some help getting inside?”

“No, nope. I’m good.” He closed the car door. From across the street, a faint movement in the window of the Guttridge house tempted him to drop trou and send a full moon Dina’s way. If she was watching, she deserved it.

Theresa came around the car and took him by the elbow. “C’mon.”

“Sure, sure, let’s go prove to my mother what a disappointment I am, okay?” He didn’t try to fight off her grip, even when she steered him around the small lip on the front walk that would surely have reached out to trip him if he’d been trying to walk on his own. “Again.”

Ilya stopped and turned to look at her. “I was being sarcastic. Self . . . self-defecating.”

“Oh, that’s exactly what you are.” Theresa’s brows rose, and she shook her head as she tugged his arm. “All over the place. C’mon. Inside. It’s wet and chilly out here.”

In front of them, the house with its dark windows was an unneeded and despised reminder that nobody was waiting up for him.

“She didn’t even leave the lights on for me!”

Theresa huffed something under her breath and led him to the front door, where she waited for him to fumble in his pocket for the keys that insisted on hiding from him. Rain slipped down the back of his neck beneath his collar, trickling down the line of his spine and making him shiver. She must’ve been impatient, because with another of those sighs, she pushed his hand aside and dug deep into his jeans to pull out the keys.

“Is that a key in my pocket, or am I just happy to see you?” It was a stupid joke, but he laughed at it.

Theresa looked at him for a second or so with her hand against him. The only barrier between her fingers and a few of his intimate parts was the pocket’s thin inner fabric. Then her fingers curled around the metal and dragged out his keys fast and hard enough to scrape him through the material. Ilya winced and yelped, but Theresa ignored him.

She opened the door and guided him inside, then hung the keys on the hook by the front door. “There. Now you won’t lose them.”

“I never put them there,” Ilya said with a gesture at the hook.

“If you put them on the hook,” she said calmly, “you won’t have to hunt for them in the morning.”

Then there was silence, unbroken except for the rhythmic plink, plink of water dripping off them both and onto the floor. A little unsteadily, Ilya reached for the newel post and found her shoulder, instead. His fingers squeezed. He pushed the wet hair off her face with his other hand.

“I’m sorry I said you should screw off,” he said.

She snorted softly. “Whatever. It’s not the first time you were ever awful to me.”

“Was I awful to you?” he asked her, weaving a little, his fingers slipping down her shoulder to squeeze her upper arm like that would keep him on his feet. “Back then, I mean? Was I a terrible stepbrother?”

For a moment, she didn’t answer. “We barely had time to be siblings, really. You weren’t great, but you could’ve been worse.”

Theresa smiled, finally, and he hadn’t realized until that moment how hard he’d been trying to get one of those out of her. “You’re drunk. Let’s get you some water and then to bed.”

“It’s been a little while since a lady said that to me.” Ilya wove a little bit, squinting to focus on her face.

Theresa rolled her eyes. “That’s not what I’ve heard.”

In the kitchen, she drew him a glass of water from the tap and ordered him to drink it. Clear, cool, fresh. The liquid hit the back of his throat and slid down like heaven. He gulped, waiting for his stomach to protest, but everything stayed settled, and he held out the glass for another fill. He drank that one, too, watching her over the rim as she leaned against the counter.

“Who’s been talking about me?” he asked her.

Theresa eyed him, then went to the fridge to pull out a can of cola. She cracked the top and sipped, letting out a long, slow, appreciative sigh. “People talk. That’s all.”

“You moved all the way to the next town over, and you’re saying people talk about me?”

The name sounded familiar, but that didn’t mean anything. She could’ve been someone who came to Go Deep to dive. She could’ve been a local news reporter. She could’ve been his kindergarten teacher. Something in the way Theresa looked at him suggested something else, probably a one-night stand. Lots of those were blurry in his memory, like most everything else at the moment.

When he didn’t answer her, Theresa finished off the cola and tossed the can into the recycling bin. “You don’t even remember her?”

“What’s your thing?” Ilya tried to sound serious, but the words came out mixed and mumbled.

Theresa laughed. “I’m not going to talk to you about my thing, Ilya. It’s late.”

It was, but he knew better than to try to go to bed just yet. That would lead to a sick head and stomach in the morning. Besides he wanted to know what kind of guy she was into. Why it had become so suddenly important to him, Ilya had no idea. Only that it was.

“Oh, brother. Let’s get you upstairs. I’ll help you get to bed.”

“So long as you promise . . . promise not to take advantage of me.” He blinked and straightened, attempting to put on a haughty attitude, but dammit was hard when the world was tilting. “Shit. I am drunk.”

“I can make it by myself.” He shrugged off her grasp, determined not to be pushed into doing something he didn’t want to do. Too many women in his life had tried to make him do stuff “for his own good.” He was tired of it.

She laughed at that, a trill of giggles. “Sure you can. Like the time you huffed too many whippets and tripped on the last step and got a concussion?”

“You remember that?” Ilya touched his forehead reflexively, remembering the pain. His nose had bled. Niko had laughed himself into hiccups, but Theresa had brought him ice wrapped in a dishcloth. Funny, the things he could remember when there were so many others he had forgotten. He looked at her. “Yeah, you were there.”

“I was there,” she agreed and hooked her arm beneath his to lead him toward the hall and toward the front stairs, not the steeply pitched and creaking back set.

He flicked the wall switch at the bottom of the steps, turning on the light in the upper hallway. He put his foot on the bottom stair. His hand on the railing.

“Ask me if I care. Couldn’t even leave a light on for me. They deserve to be woken up.” The words came out muttered and slurred. He was so tired, and she’d been right about bed being the best idea, but he wasn’t going to admit it. All the way up the stairs, one foot at a time, down the hall. He stopped in the bathroom and fumbled with his zipper so he could take a long, hard piss, which rattled in the bowl. He didn’t bother to flush.

In his bedroom, he fell face forward onto the unmade bed. He felt her hands slipping off his shoes, one at a time. Heard the thunk of them on the floor. He wanted to thank her, but with his face pressed into the pillow and his mouth open, already drooling, the most Ilya could manage was a grunt.

The bed dipped as she sat next to him. “Do you need anything?”

He shifted, meaning to answer her, and somehow found her hand with his. Their fingers linked. He kissed the back of her hand, since his words weren’t working any longer.

“Your hands are soft. Your hair is soft. Everything about you is so soft, Theresa.”

“You . . .” She sighed and withdrew her fingers, then hesitated, leaning forward to stroke over his hair. “Go to sleep.”

He found a few new words at the last minute, when she was already almost out the door. “Are you, too?”

“All . . . the women in my life . . . mother, Alicia . . . they’re all disappointed in me. Are you?” The question came out of him like a belch in church, unexpected and unwanted and embarrassing. He wished at once he could take it back.

Theresa’s low chuckle eased him. Kept him from continuing to fight the waves of sleep overcoming him. Her voice soothed him.

The last thing he thought he heard before sleep claimed him was her lilting, laughing answer.