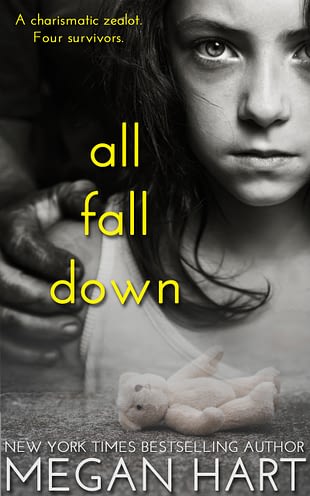 When Sunny flees the only home she’s ever known, her three small children in tow, she has no idea that the rest of the family she’s leaving behind will be following the orders of their religious leader to end their lives. When she ends up on the doorstep of her biological father, a man who has no idea she exists, all she can do is hope for his compassion.

Liesel Albright has always wanted children, even when her husband Christopher does not. When Sunny shows up with her three little ones, it seems as though all of Liesel’s prayers have been answered.

How can a young woman raised in a cult adapt to the “normal” world? How can a woman who desperately wants children of her own adopt and adapt to this brand-new family? Sunny’s past continues to haunt them all…until it seems as though it might finally also destroy them.

All Fall Down is an emotional story of love and motherhood…of what it means to be a family, and how even the most difficult circumstances can lead to the greatest rewards. For fans of Jodie Picoult and Kelly Rimmer.

Sunny’s thirteen when the new girl arrives with her mother in Sanctuary. New people do show up sometimes, but it’s usually single women or men, not families. The women are almost always already pregnant from one of the Family Superior men. That was how Sunny’s mom had joined the family. It wasn’t a secret or anything. John Second had brought her to the light, and it was the best thing that had ever happened to her, that’s what Sunny’s mom says. Always with a smile.

The new girl doesn’t smile very much. She’s tall, with super short hair like a boy’s that she wears spiked up for the first few weeks, until she runs out of the hair gel she hides under her bed and discovers wet soap doesn’t work the same. She has freckles and dark eyes she smudges with lots of black liner until John Second calls her up in the front of the chapel and makes her wash her face in front of everyone. Women in the Family of Superior Bliss don’t cover what the Maker gave them with makeup that hides their light. The girl definitely doesn’t smile then. She cries, loud and long and hard, and they make her go to the silent room for it. When she comes out, she talks even less than she did before.

There are lots of kids in the family, but all of them, like Sunny, were born into it. This girl’s name is Bethany, and she doesn’t change it. Her mother changed her own name from Joyce to Joy. Nobody made her, she just did because she said she wanted to fit in. Her daughter doesn’t seem to care about fitting in.

This fascinates Sunny, who’s never had a choice about fitting in or not. She does what she’s told. She lets her hair grown long and braids it, she dresses modestly, she wears her face clean and scrubbed. But secretly, down deep inside the place she would never let anyone see, she wants to be more like Bethany and less like Sunshine.

Bethany won’t talk to Sunny. Not even to say “leave me alone,” though it’s obvious that’s what she means when she turns her back and walks away without even looking at what Sunny’s holding in her hand. It’s a cookie Sunny pinched from the kitchen, not a homemade kind but one from the stash way back in the pantry, behind the bulk bags of flour and rice. Sunny doesn’t actually like them. The cream in the middle is too sweet, the outer chocolate cookies almost bitter compared to the ones Neveah makes from oats and peanut butter, honey and raisins. Sunny stole the cookie for Bethany, who eats hardly anything and complains all the time about how much she misses McDonald’s. Sunny’s never eaten there, though she’s passed the Golden Arches and knows what it is. It’s junk food. Bad for the vessel, bad for the soul.

Sunny thought Bethany would like the junk food cookie that’s hidden away from everyone. Nobody’s supposed to know it’s for John Second to nibble at along with his equally secret coffee in the morning. When Bethany walks away, her shoulders hunched, her once-spiked hair flat down on the back of her skull, Sunny follows her.

“Where are you going?”

“I hate it here.” It’s not the answer to Sunny’s question. Bethany still doesn’t turn, but her voice gets harder. Rougher. Her shoulders shake and fists clench. “I hate it. I want to go home. Living with my dad would be better than living here!”

Bethany turns then. “Are you kidding me? You’re kidding, right? I mean, even you can’t be that stupid.”

Sunny blinks rapidly. Takes a step back. Her mouth opens and shuts without letting out a single word.

Incredibly, Bethany laughs, though it sounds awful. Like hinges squealing. “First of all, my dad doesn’t want me to live with him. He got remarried to a complete bitch, and they have some kids now. Together. There’s no room in his house for me. Second, don’t you get it? Walk away from this place? How’m I supposed to do that?”

Bethany shakes her head. Laughs again. It sounds worse this time. “You think I could just walk out the front gate?”

“Well…” Sunny looks down at her hand. Crumbled cookie. Smears of dark, white bits mixed in it. “Why not? It’s how you came in, right?”

Sunny blinks again, feeling the sting of tears and forcing them away. “You shouldn’t call names.”

“Why are you so sweet?” Bethany shouts, sending Sunny back another step. Then another. And another. “You wacko? You believe in all this stuff? You like it here, you love it! You love this place!”

“Of course I do!” Sunny’s not sure she’s ever shouted, not in thirteen years, though probably as a baby she screamed, at least a little. Babies do that before they learn to hush and shush. It hurts her throat to shout, but not as bad as the pain inside her from what Bethany is saying. “Of course I love it here. It’s my home!”

“You like going to bed with old men? You want to be what…the one true wife or whatever it’s called?” Bethany’s mouth twists, making her ugly. “You like getting knocked up with their babies, right? You like spending every day in this place scrubbing floors, starving or eating spoiled food? Well, I don’t! I hate it! I hate it!”

“So leave!” Sunny cries and claps a hand over her mouth. Words squeak out between her fingers anyway. “If you hate it so much, then leave.”

Two days later, she’s gone. John Second calls a meeting in the chapel while Papa looks out over all of them with bleary eyes. Papa stares at them a long, long time without saying anything, though his mouth is open. Papa coughs so hard he drools. Finally, he crooks a finger; John Second leans close and listens.

When he straightens up, he says, “If anyone knows where she went, you’d better make a report now.”

Saying nothing would be as bad as speaking with a liar’s tongue. Worse, even, because John Second’s asked right out loud for an answer. Besides, Bethany said Sunny was stupid. Sunny tells them about Bethany’s plan to go to her dad’s house. This makes Bethany’s mother snort with laughter. Bethany’s dad lives four hours away. Without money or a ride, there’s a good chance her daughter didn’t get very far.

Not far enough, anyway. Sunny doesn’t know how they find her, but they bring her back and put her in the silent room. Bethany isn’t quiet. She screams for a long time while the rest of them pretend they hear nothing. They walk past and ignore the shrieks and sobs. They make their faces like stone.

When the crying stops, John Second says there will be another day before they can let Bethany out, so she understands what it really means to be silent and learn to listen. And the day after that, Sunny is in the wrong place at the right time to see them pull Bethany out of the silent room. She’s limp and still and pale except for the parts where there’s blood.

Nobody speaks of it. Ever. Not even Bethany’s mother. It’s like Bethany never existed except in some made-up place inside Sunny’s brain, and she knows that can’t be true because if she’d made her up, Bethany would never have called Sunny stupid. She’d have been Sunny’s best friend. And she wouldn’t have killed herself, either. She’d have stayed inside Sanctuary the way Sunny does, scrubbing floors and waiting for the rainbow to take them through the gates.

Sunny has thought of Bethany often over the years. Her freckles. Her smudged eyes. Her hair. Most of all, the things she’d screamed when she was in the silent room, about how she hated the family. Hated Sanctuary. She’d screamed out lists of places and things she didn’t hate. McDonald’s, Starbucks, HersheyPark, Walmart, Ocean City. Cheeseburgers, cable television, rap music, video games, Coca Cola, sugar, cupcakes, French fries. Eyeliner, lipstick, tampons, birth control.

Those were worldly things, and Sunny thought of them now. What had been so wonderful about worldly things that had made having them so much better than being in Sanctuary? What was it about the world that had made Bethany willing to give up any chance she had about going through the gates?

Here in this tiny, pink-painted bathroom in her father’s house, her biological father’s house, the man she hadn’t even known existed, Sunny wondered how long it would be before John Second discovered where she’d gone and came to take them back to Sanctuary. She washed her hands over and over again. They were were almost raw with clean, but she washed them again anyway. Her children were outside of this small room, in the kitchen with her father’s wife. Her children were outside, and Sunny was inside, and she should go out but instead she squirted more soap into her palm and ran the water so hot it turned her skin red.

She ought to go out, but all she could do was look at her face in the mirror and wonder what in this world was so wonderful it was worth dying for.

Burgers by the sack

BUT ONE GIRL DOE