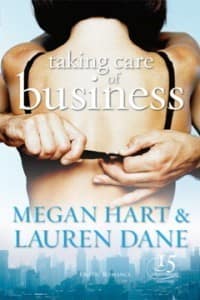 After leaving the wrong man, Leah Griffin’s not ready to look for the right one. All she wants is to survive the conference she’s planning and spend some time with her best friend Kate Edwards. She was not expecting the conference services manager to be so tall, dark, and handsome—or so eager to please. It’s Brandon Long’s job to make Leah happy, but after a scorching interlude in her hotel room, neither can deny business has become pleasure. Smart, driven, and successful attorney Kate Edwards has spent her life making the right choices. But in contrast to those right choices, she’s involved in a long distance, secret love affair with a coworker. Charles Dixon is a bad choice she can’t help but make—over and over. A conference and a promotion bring Kate back to Pennsylvania, and suddenly, Dix wants far more than a few nights in random hotel rooms. He wants something permanent, and Kate has to figure out if sometimes a wrong choice isn’t exactly what a woman needs.

The woman with the dark hair spoke like she had no doubt she’d get exactly what she wanted, and Brandon did as he was told. He pulled an unused chair from the next table and sat. He watched the smile freeze on her face. She hadn’t expected him to do it, he thought, and wondered why she’d told him to if she didn’t believe he’d obey.

‘Is this better?’ He’d turned the chair around the opposite way so he could straddle it, and now he folded his hands on the back to look at her expectantly.

It wasn’t Brandon’s job to make nice for the guests, but the hotel manager had talked him into taking some extra shifts and he could use the cash. Taking over for Heather while she was on maternity leave had meant a lot more responsibility but no raise. Besides, it wasn’t like it was hard work or he had anything better to do with his time.

‘Much,’ the woman said while her friend stifled a laugh.

He’d already made sure their waitress was taking good care of them, but their laughter had drawn him. They were having fun. The fact they were both smoking hot had nothing to do with it, he told himself, knowing it wasn’t true. Hey, working late had to have some perks, right?

‘Did you hear that?’ The woman on his left said across the table. ‘He did say anything, Leah.’

Leah. He let the name play around on his tongue but kept inside his mouth. She had an empty drink in front of her, and he knew he should ask her if she needed another but before he could her friend got up. She used his shoulder to help her get out of the booth but waved him away when he started to get up to help her.

Leah put a hand over her eyes briefly, shaking her head, before she looked up with a grin. ‘You’re so bad.’

Kate flashed him a grin he returned, and she patted his shoulder again. ‘Have fun in Paris.’

He waited until she’d gone before turning back to Leah. ‘Paris?’

One he clearly didn’t get. ‘Okay.’

Behind him he heard the buzz and murmur of the crowd and knew he ought to make some more rounds. He didn’t want to. ‘Well, I guess I should get back to work….’

‘Should you?’ She raised an eyebrow and leaned back in her seat. ‘What will happen if you don’t?’

Not much, probably. Rick wasn’t on duty and the front desk knew where he was in case of problems. The bar staff didn’t need him looking over their shoulders.

‘I could get into trouble,’ he said anyway, teasing but not smiling. He wouldn’t get into any trouble if he left, but he was hoping to maybe find some if he stayed.

Her smile widened. She had pretty eyes. Dark blue, he thought, though it was hard to judge the color in the bar’s dim lighting. He liked the way her mouth curved, how her lips stayed plump and didn’t disappear.

‘We wouldn’t want that.’ Her words were light, a little teasing, but he didn’t mistake the hint of flirtation in them. ‘You’d better get back to work.’

He didn’t get up, just gave her another purposefully solemn look. ‘I just have to make sure you’re all taken care of, first. Don’t I?’

‘Oh my,’ she said and laughed, ducking her head before she gave him a sideways glance. ‘You’re very good, aren’t you?’

She was good, too. Brandon leaned, not too close but just enough. ‘That’s up to you to decide, isn’t it?’

‘I’m Leah.’ She held out her hand for him to shake.

‘Tell me something, Brandon.’ She let her mouth linger on his name and it wasn’t hard for him to imagine her moaning it. ‘Is this part of your job description?’

‘Keeping the customers happy?’ He was still holding her hand, warm and surprisingly small in his. He was always surprised by how much smaller most women’s hands were than his. ‘Yes. Sure is.’

She squeezed his fingers briefly and let go. ‘I’m not the only customer here, though.’

He deliberately didn’t look around at anyone else. ‘They’re all okay. I checked.’

‘Did you?’ She seemed amused.

Her eyes drifted over his face and he took the chance to look over hers. She wasn’t easy to judge, not like half a dozen of the other women he’d already met tonight. The ones he hadn’t sat down next to. It had always been pretty easy for him to figure out what women wanted, how to give it to them…when he wanted to. Most of the rest of the women were here to get picked up, have drinks bought for them. Be pursued. It was part of the club-hopping game, and he didn’t mind flirting with them because it made the time pass faster.

But this woman was different. He wasn’t quite sure how. He thought she was flirting, but not in the coy, clumsy way he was used to. He couldn’t be sure if he was turning her on or making her laugh. Maybe it was because she was older, he thought, studying her as she looked him over without pretending she wasn’t. Older and more confident.

‘Besides,’ he added with a glance at the clock. ‘I’m off duty in half an hour.’

‘Really?’ Her tone indicated an arch surprise. She turned her glass around and around in the circle of condensation on the table. ‘That’s convenient.’

He still needed – sort of – an excuse to stay here beyond the simple fact he wanted to. ‘Can I get you something else?’

‘No. I’m done drinking for the night.’

She laughed. ‘Where are you from, Brandon?’

‘What makes you think I’m not from around here?’ Someone passing behind him nudged him, and he glanced back to make sure he wasn’t blocking the aisle.

‘What gave it away?’

‘Pop.’ She dragged a finger through the wet circle, smearing it. ‘So, where are you from?’

She leaned back to make a show of looking at his legs, all the way up again to his face. ‘They grow them big in Iowa, don’t they.’

It was his turn to laugh. ‘Yeah, I guess they do.’

‘So how’d you end up here?’ she asked, but before he had time to answer her she was looking over his shoulder and that pretty smile had disappeared. The light in her eyes went out, too, just like that. ‘Oh, shit.’

Brandon looked over his shoulder, too, but saw only the crowd. Leah was getting up, though, and he automatically stood as she did. The floor of the booth was raised a few feet, so she stood almost level with his eyes. He reached for her elbow without a second thought. He didn’t want her to fall. She didn’t shake him off. Her hand came down on his shoulder.

Brandon twisted to see where she was looking as she got down. He spotted the man she meant. On first glance he’d blended in with the crowd, just one more guy in a suit with his tie pulled loose and a beer in his hand. On second look, though, it was easy to see he was looking for someone and wasn’t happy about not finding her.

Brandon had seen fights in some of the clubs downtown, but never here. The Market Street Café wasn’t really the place for that sort of thing. Watching this guy catch sight of Leah, though, Brandon thought maybe tonight that would change.

‘Leah.’ The other guy didn’t even look at Brandon. ‘Come on. Come home.’

‘No.’ She didn’t shrink away and she didn’t put Brandon between them. ‘I told you that before. We’re over, Mike.’

Mike didn’t seem to like that idea. Brandon had seen guys like this before. The ones who thought money in their wallets and a nice car entitled them to anything they wanted. Mike held out his hand.

This time, Brandon stepped forward. ‘Hey, buddy. She said she wasn’t going with you.’

His muscles tensed, fists not-quite clenching. He was taller than this jerk, if not broader. Brandon could take him, if he had to. The other guy looked at him, finally, but dismissively.

Brandon didn’t move. Leah stepped past him, past Mike. She looked over her shoulder at Brandon, her expression cool and composed though he’d felt her hand twitching on his shoulder.

And of course, he went.

Don’t miss the sequel, No Reservations, and the companion story, Unwrapped!