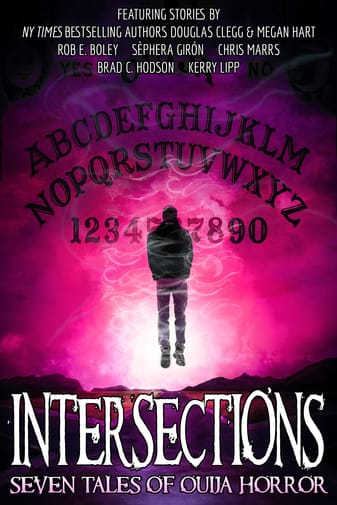 Used to connect the living and the dead, the Ouija Board has long been used as an intersection between our world and the next. But some questions should remain unanswered, some secrets should never be revealed…and some games should not be played.

What fates await the unwary who tempt the darkness? Find out in INTERSECTIONS, seven tales of Ouija horror in an eclectic collection from some of the genre’s favorite and finest writers.

Mother tilted her head to stare at her. Beneath her fingers, the planchette spun lazily. “Perhaps they’re chopping wood. Perhaps they’re taking naps. Or reading books. Or doing the things boys do when they’re alone.”

They were far from being boys, all of them, but even so Tori didn’t want to think about what those things might be. Luka brought in a tray. A huge bowl of soup and a smaller plate next to it, a thick cut slice of crusty bread smeared with butter. Her stomach rumbled again.

“Be careful,” Mother said, watching her. “Don’t burn your tongue.”

Tori wanted to hesitate, to be careful, to at least have the manners Mother had already accused her of not having, but she was so fiercely ravenous she could not stop herself from dipping the spoon into the soup and drinking a long mouthful. It was so good, so fucking good, thick and rick with broth and salt and vegetables, that she groaned aloud. Bite after bite, the spoon too small to get the food into her fast enough, she drank. She lifted the bowl and drank directly from it, stopping herself only at the sight of Mother’s face.

Instead of chastisement, the old woman offered encouragement. “Yes, yes. Eat. You need your strength.”

Tori sat back in the chair to take a breath. The soup had taken the edge off her hunger, but she wanted more. As though he’d already guessed that, Luka appeared with a platter of sliced cold chicken. Seasoned noodles. More bread and butter. Green beans.

Tori gobbled, using her fingers, shoving the food in so fast she could barely keep up. Chewing. Moaning at the burst of flavors on her tongue.

She couldn’t remember the last time food had brought her such pleasure. She dug into another helping of chicken, more noodles, she swiped the bread through the sauce of seasoning and melted butter left behind on the plate.

With her belly distended, Tori sat back in the chair and stifled a long, rumbling burp with the back of her hand. She laughed, certain Mother would scold. The old woman laughed gently. The planchette tipped toward YES.

“In my day, it simply didn’t do for a young woman to consume anything with such enthusiasm. Not food, nor other things.” Mother’s grin stretched over those square, unnaturally white teeth. “Fortunately, I had the guidance of the board to assure me that no matter how…fierce…my appetites, I should be free to pursue them.”

“I haven’t eaten like that in years.” Tori burped again, softer this time. “Excuse me.”

Mother gave a sharp glance toward the door, where Luka loomed in silence. “What are you doing? I’ve told you before, stop lurking. Be useful! Clear away these dishes!”

With all the food in her belly, Tori could barely move, but she got up from the table. “I can help.”

“Don’t be silly. You should rest.” Mother snapped another glance toward her youngest son. “What are you looking at?”

He was looking at Tori. She could feel it, the heavy weight of his green gaze, and she turned to meet it with her own. Men had looked at her with lust, sometimes. With anger. A few, with fear. None of them had ever looked at her the way Luka was right now.

She had no idea what that unwavering gaze meant, but she couldn’t even begin to think about it before a yawn stretched her jaws so wide she heard the creak and crackle of her tendons. “I think I need to go upstairs now, though. Maybe take a nap.”

“Of course, of course. The boys have brought in enough wood to keep the house warm, but I’ll have Luka bring you extra blankets. The upstairs can get chilly, and it looks as though the snow’s going to continue all night. Enjoy your nap. Are you sure…” Mother’s voice turned eager, her gaze intense. “Are you certain you wouldn’t like to leave baby Rose here in the bassinet while you sleep? It might make it so much easier for you to rest. We wouldn’t at all mind watching her for you.”

No matter how tempting the idea of uninterrupted sleep was, Tori still had no intention of leaving her infant alone with these strangers. Having the baby close to her was a comfort, despite the aches and pains and exhaustion. She declined with a murmur and left the dining room. In the bedroom, voices drifted upward through the large ventilation grate set into the floor next to the dresser.

“What does the board say, Mother?” asked one of the brothers. She could only tell it wasn’t Luka.

Mother’s voice rasped. “You never mind what the board says. That’s for me to worry on. Doesn’t Mother always take care of everything?”

Fucking pack of weirdos, Tori thought. She cleaned herself and Rose in the bathroom and then climbed into bed to nurse while she fell asleep.