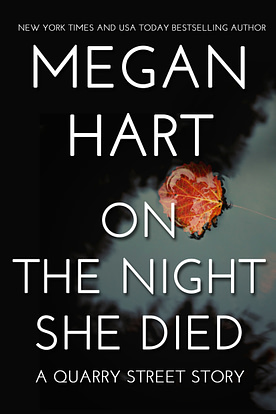 Jennilynn Harrison left them all behind — her sister Alicia. Her friend-to-lover Ilya Stern. His younger brother Niko. The Stern brothers’ step-sister Theresa.

Intertwined lives, all of them damaged by what happened on the night she died.

Readers of All the Lies We Tell and All the Secrets We Keep can now discover what led Jennilynn Harrison down the path to her destruction, plus, a sneak peak of All the Truths We Reveal, the next installment in the series.

Nobody was supposed to swim in the quarry, of course. Kids had drowned in it, at least that was the story, although Jenni couldn’t honestly remember ever hearing about any real kids who’d died there. The cops patrolled the beach side of it regularly, mostly to catch the kids who were parking along the dead-end road that led to it. They didn’t pay much attention to this side, the cliff side, which could be reached through the woods that began at the end of Quarry Street.

The group, Ilya, Niko, Allie and Jenni, and now their new comrade in crime, Barry’s daughter Theresa, never told their parents they were going swimming. Parents would tell them it wasn’t safe. Parents would say they should go to the local pool instead. Parents, though, worked during the day, and what they didn’t know couldn’t hurt them.

“So…whattya think about Barry?” In her tube, Jenni paddled through the cold water toward her sister. She nudged Alicia until she opened her eyes. “He’s pretty creepy, huh?”

Alicia gripped the sides of her raft and glared. What a wimp. “Hey, watch out.”

“He is, right?” Jenni nudged her sister again with a red-painted toe, rocking Allie’s raft. She grinned. “What are you afraid of, you’ll melt or something?”

Alicia gripped the raft so hard it dented the soft rubber. “Stop it. I just don’t want to get my hair wet.”

Jenni let herself bend in half to dunk herself down through her tube, then resurfaced to end up with her butt in the center with her legs dangling over the sides. She didn’t give a damn about her hair getting wet. The sun was bleaching it whiter every day, and she liked it that way. When the roots grew in darker, more like a honey gold color, she wouldn’t even try to color them. She was still thinking about dying it some weird color. Or black. There was always going black.

“I know, you’re afraid of Chester. You think he’s gonna chomp you.” She laughed as she said it.

Chester was the carnival goldfish Jenni had tossed in the water a couple weeks ago. Since then, they’d all been joking that he was out there, growing and growing like the sunfish in that movie they watched a few months ago about a mountain where all the animals had mutated because of mercury poisoning or something from a mine.

Allie settled back on the raft, though she hooked a foot against her sister’s to keep them from floating away from each other and to keep Jenni from tipping her. “About Chester?”

“I dunno. He seemed okay at the wedding. He’s been nice to us so far.” Allie shrugged.

Barry Malone had married Galina before any of them had barely known she had a serious boyfriend. It had kind of fucked up Ilya. Then again, Ilya was kind of fucked up in general. Jenni looked across the water to where he was laying on the outcropping of rock where they kept their towels. On his back, shades protecting his eyes from the sun, probably napping. Even at this distance, she could see the defined muscles of his biceps. Imagined his abs. She shuddered and hated herself for wanting him.

“Theresa’s okay, I guess,” Jenni said, forcing her attention from Ilya to the girl reading next to him. His new stepsister, Barry’s daughter, a bit younger than all of them. She’d fallen into their little group easily enough. “Can you imagine, though? Having to actually live with those guys?”

“At least she doesn’t have to share a room,” Allie said.

“No shit,” Jenni agreed with another grin. “Sharing a room totally sucks.”

Allie laughed and shoved Jenni’s tube with her toes, but Jenni was too fast and grabbed Allie’s ankle so she didn’t tip. Also so the force of Allie’s shove didn’t force them apart. Jenni dug her nails in a little too deep, though.

They floated in silence for a few minutes. Chilly water lapped at Jenni’s toes. Her butt was getting numb, not just from the temperature of the water but also because of the way she had to contort herself to fit inside it. She had a fat ass, she thought lazily, but knew it wasn’t true. Even though she’d started eating pie after every shift at the diner, she wasn’t anything close to fat. Thinking of the diner now, she also thought of Barry.

“You’re a natural at this,” Barry had told her.

Barry had been selling his own shit for some time before she met him, but recruiting Jenni had been a smart move. Men would pay a pretty girl more than they would give another dude, even if they didn’t realize it. More money for him. More money for her. Jenni was all about more money, since the more she had, the sooner she could get out of this place. Get away. Far, far away.